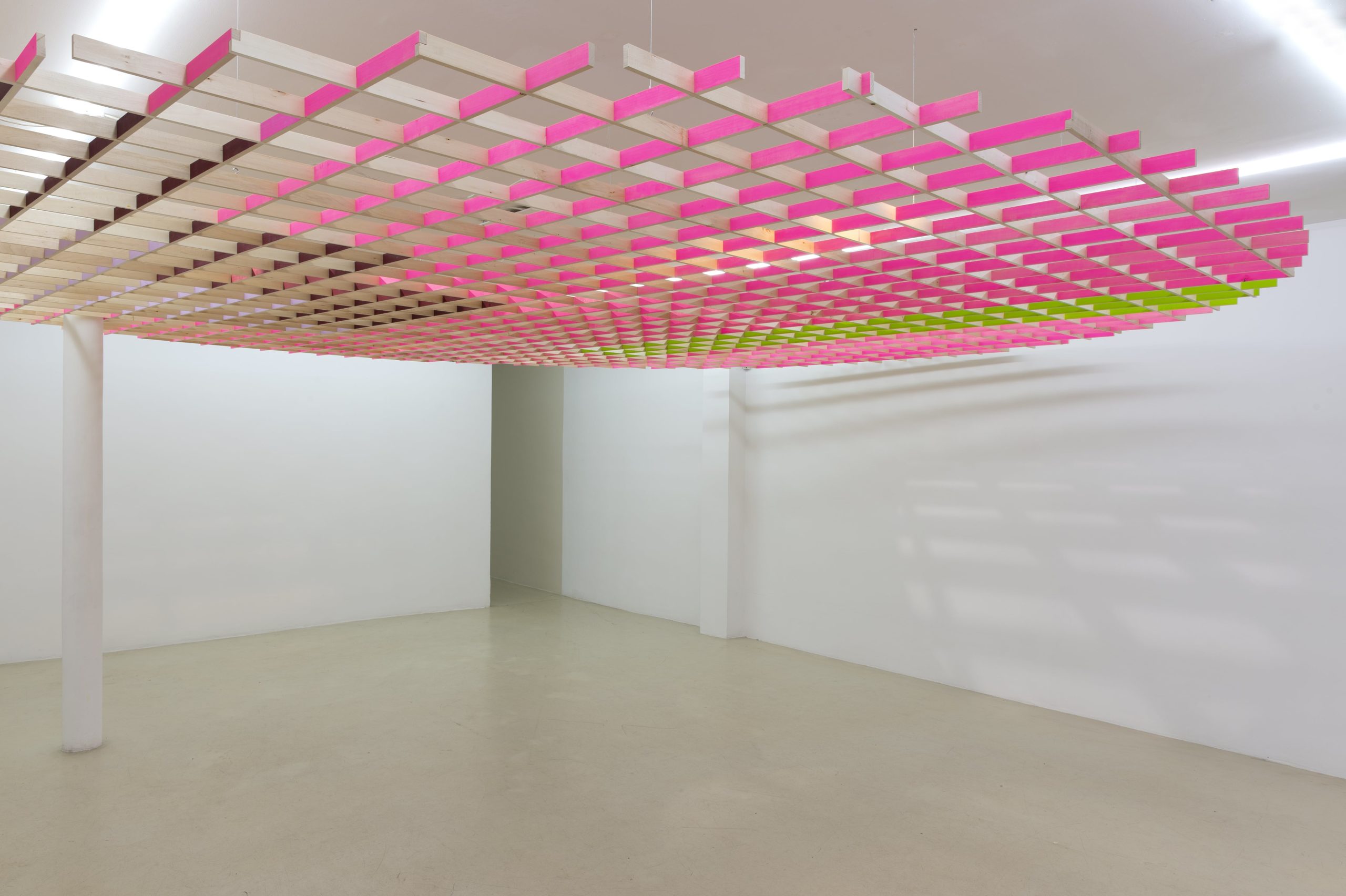 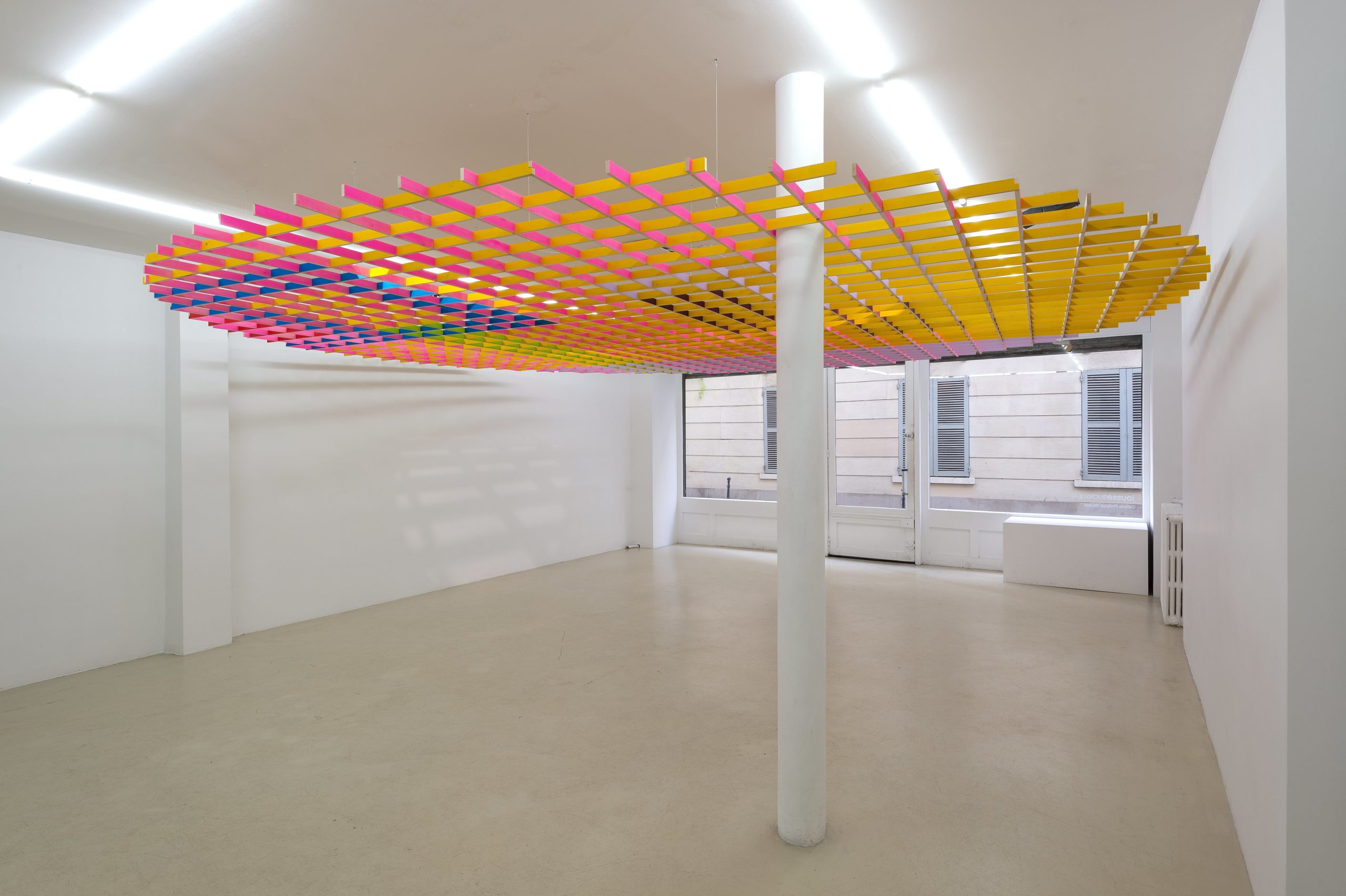 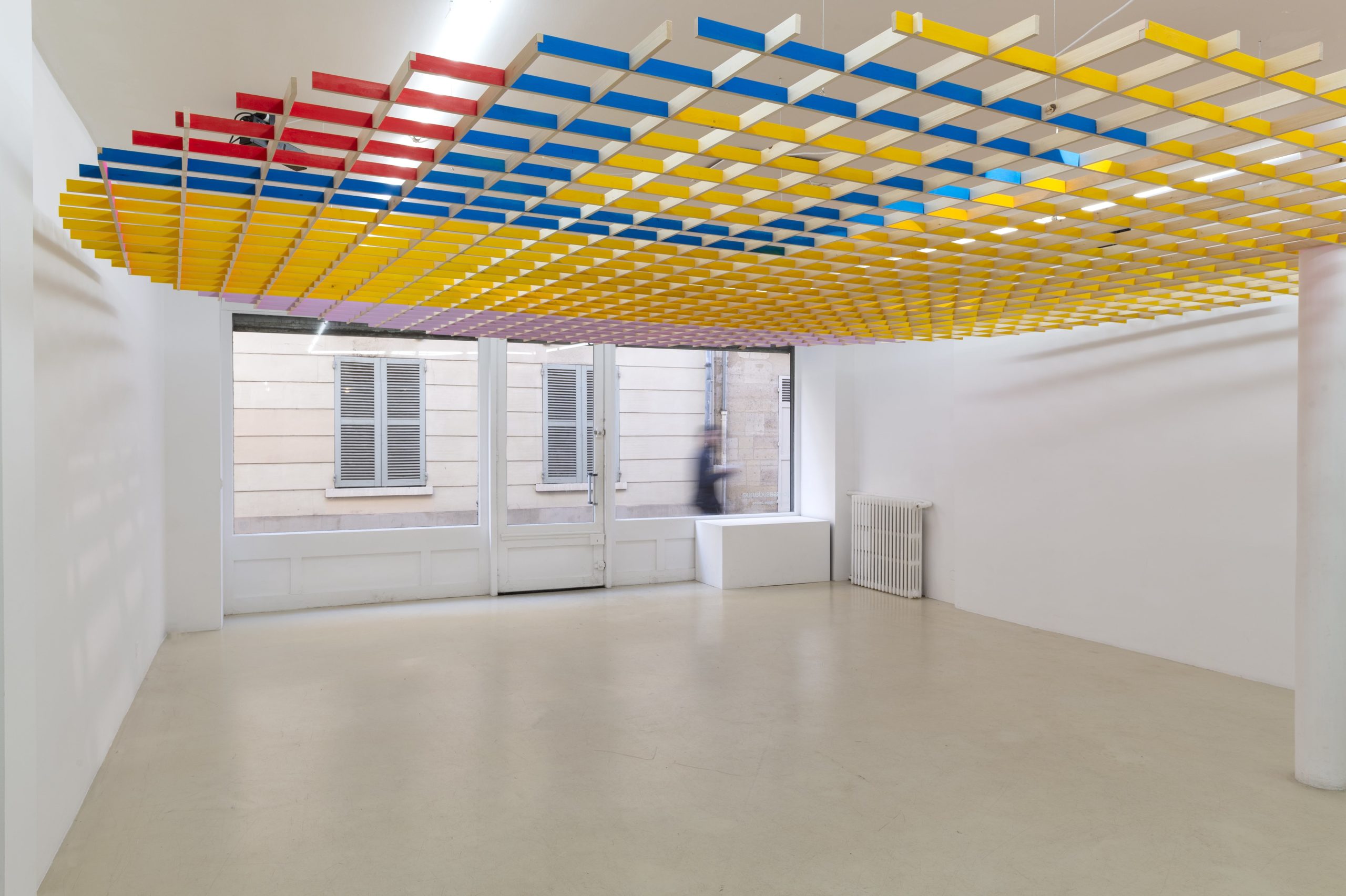 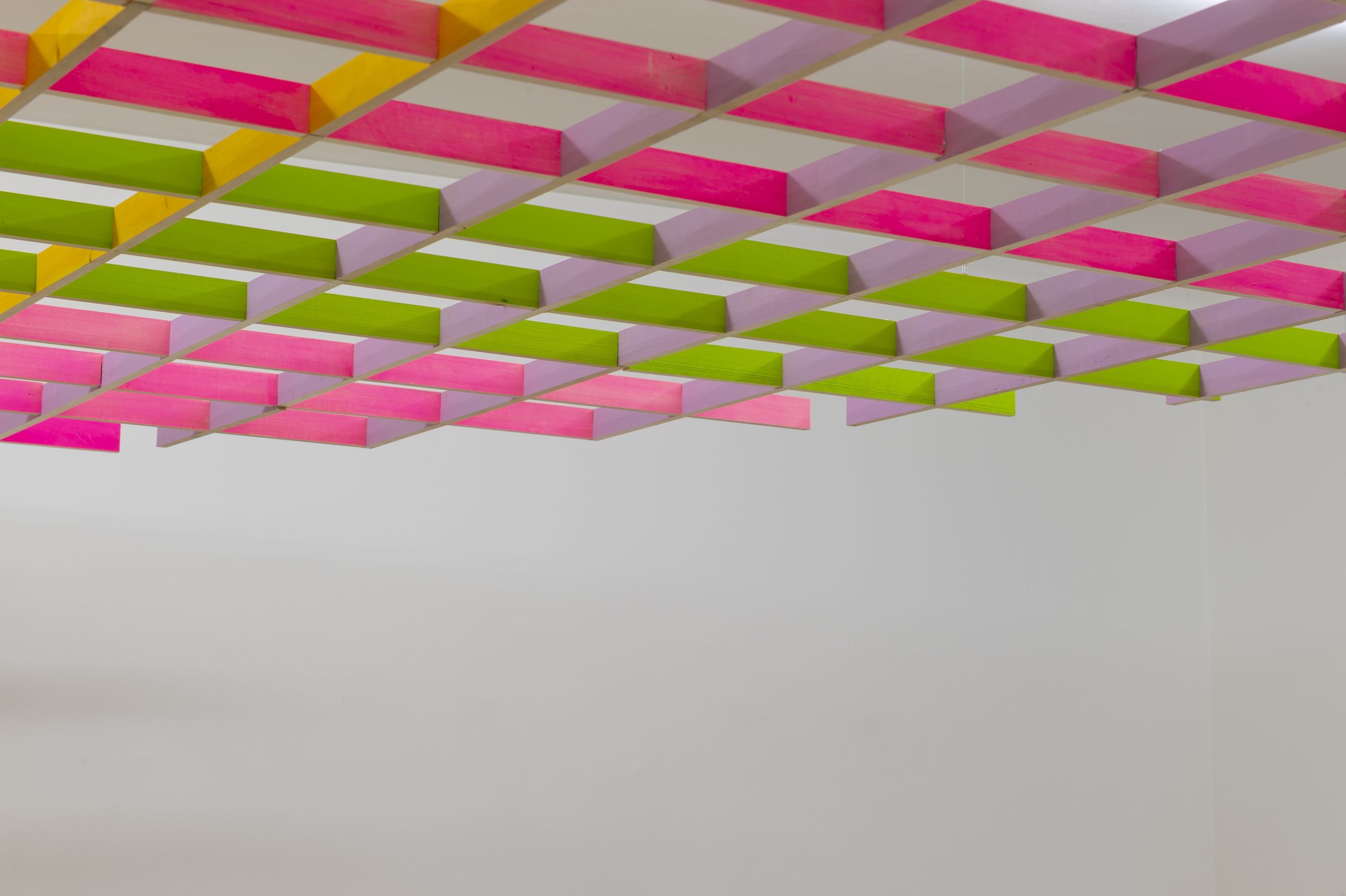 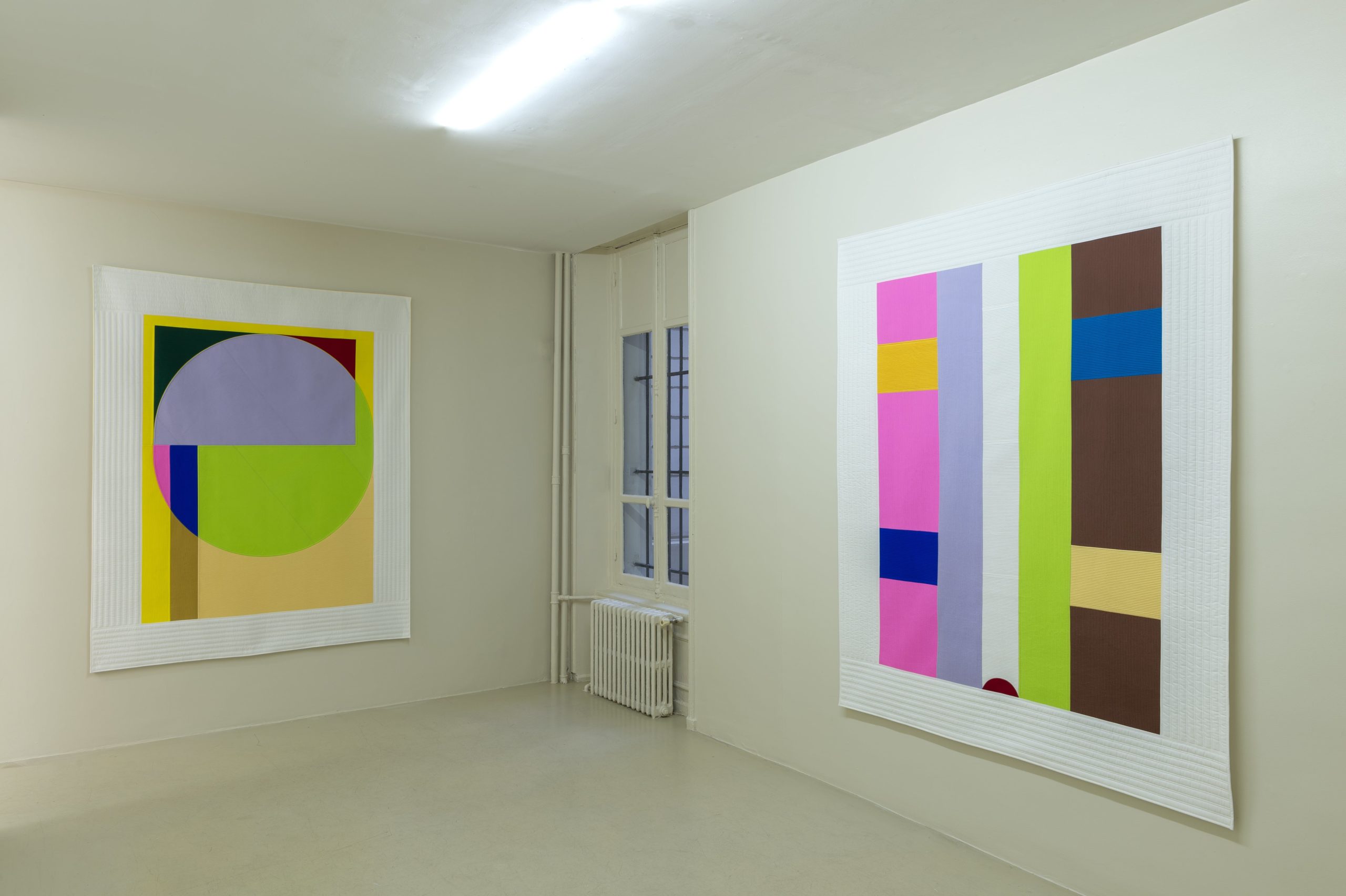 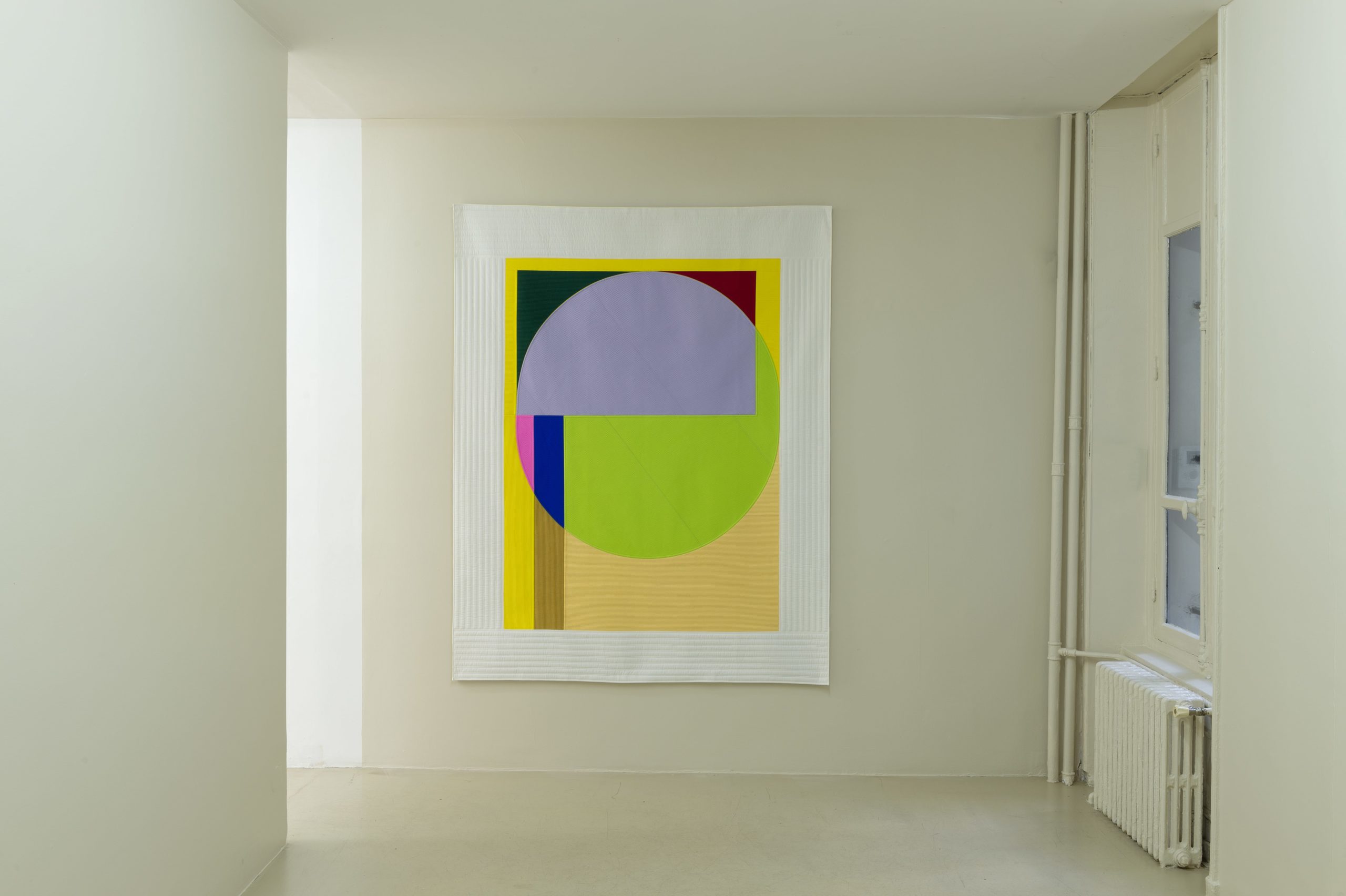 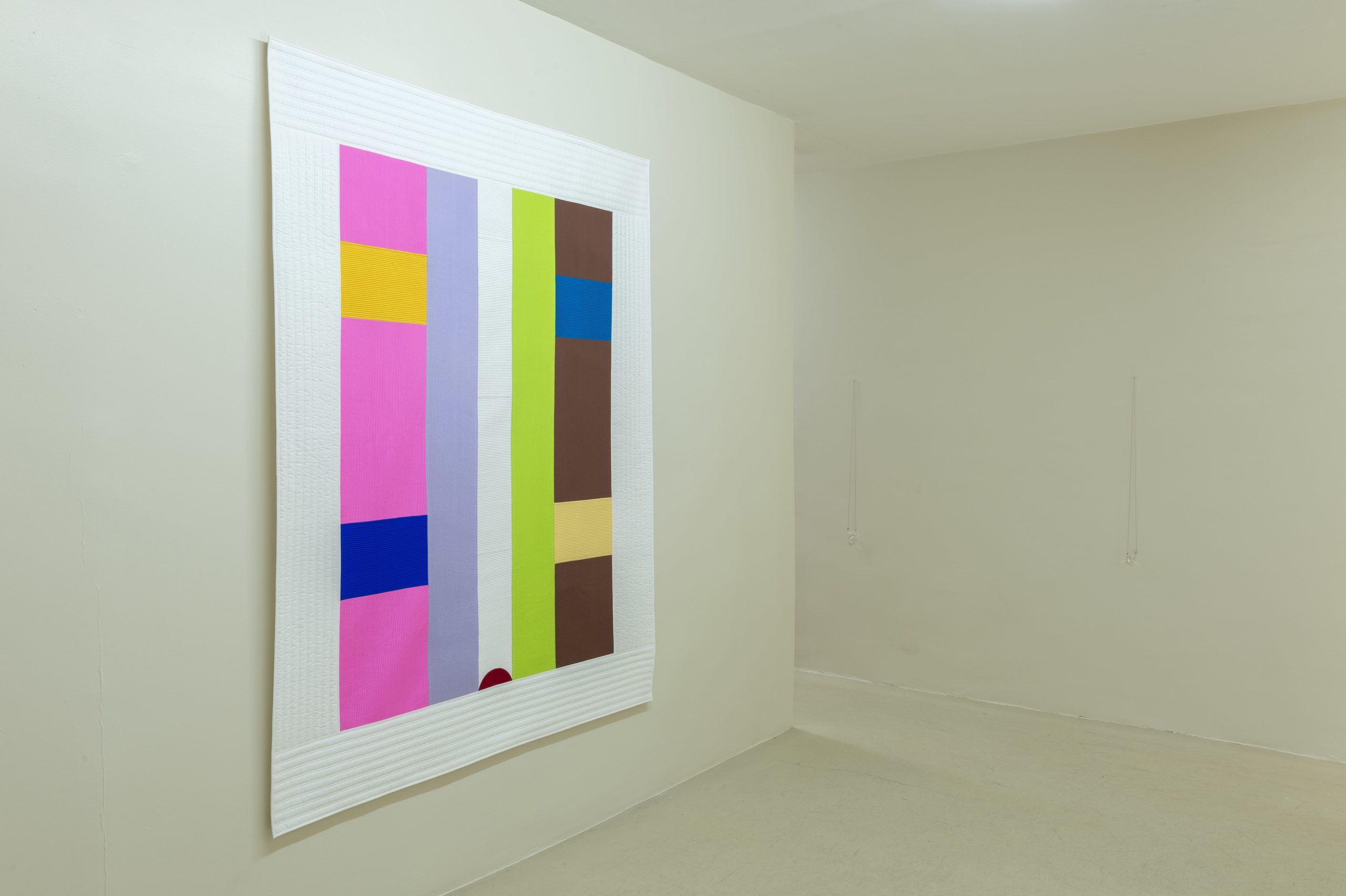 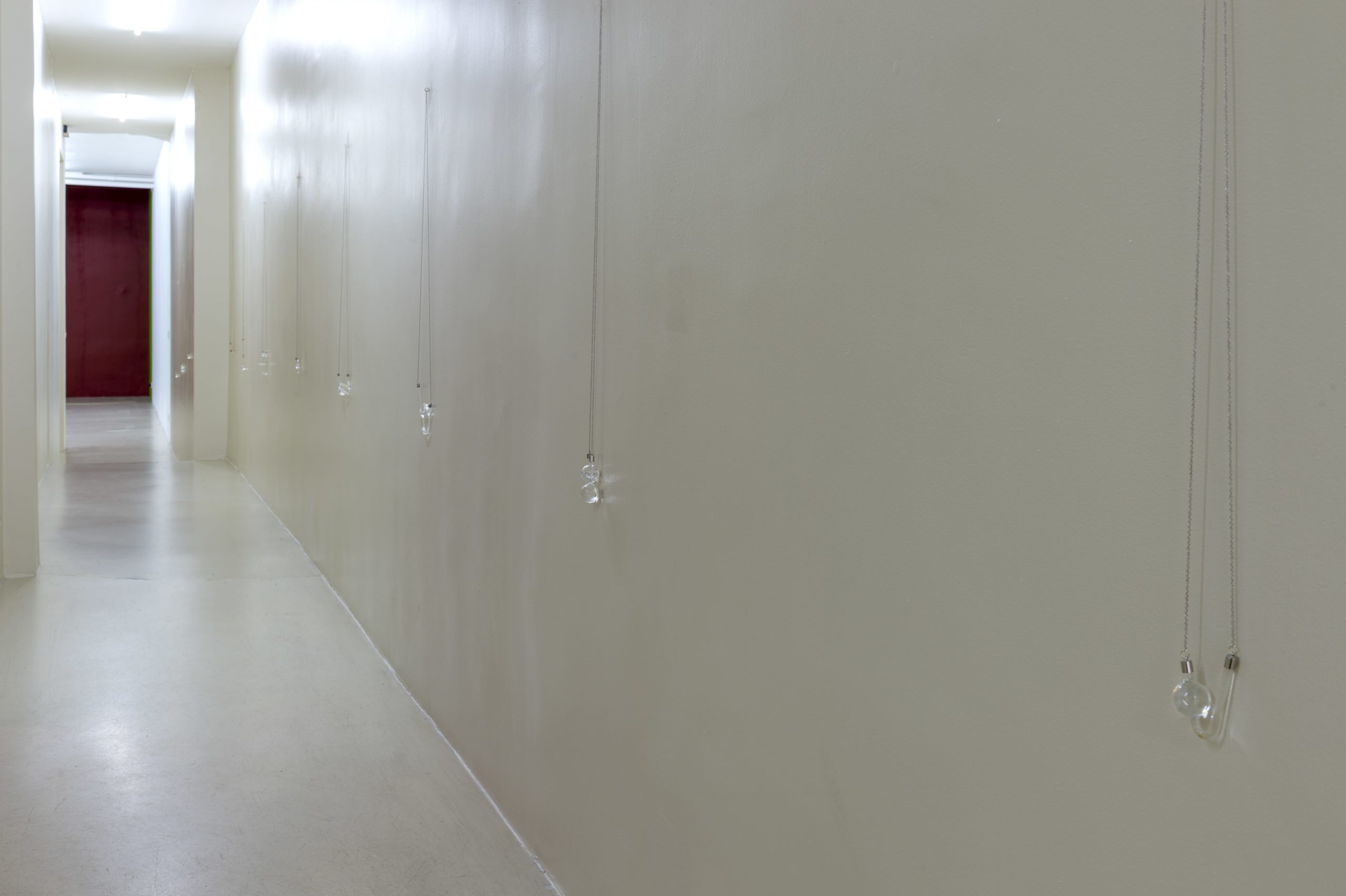 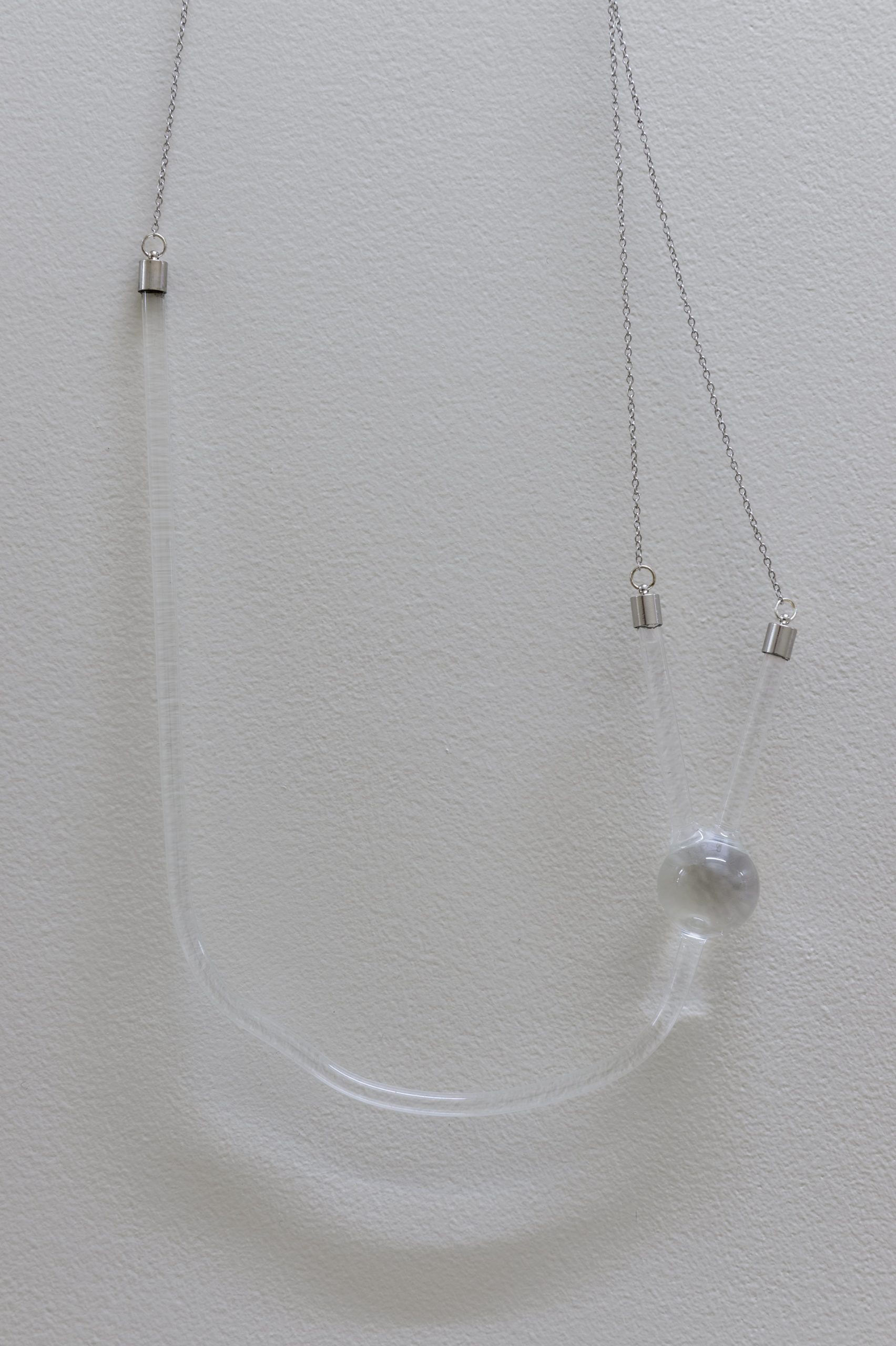 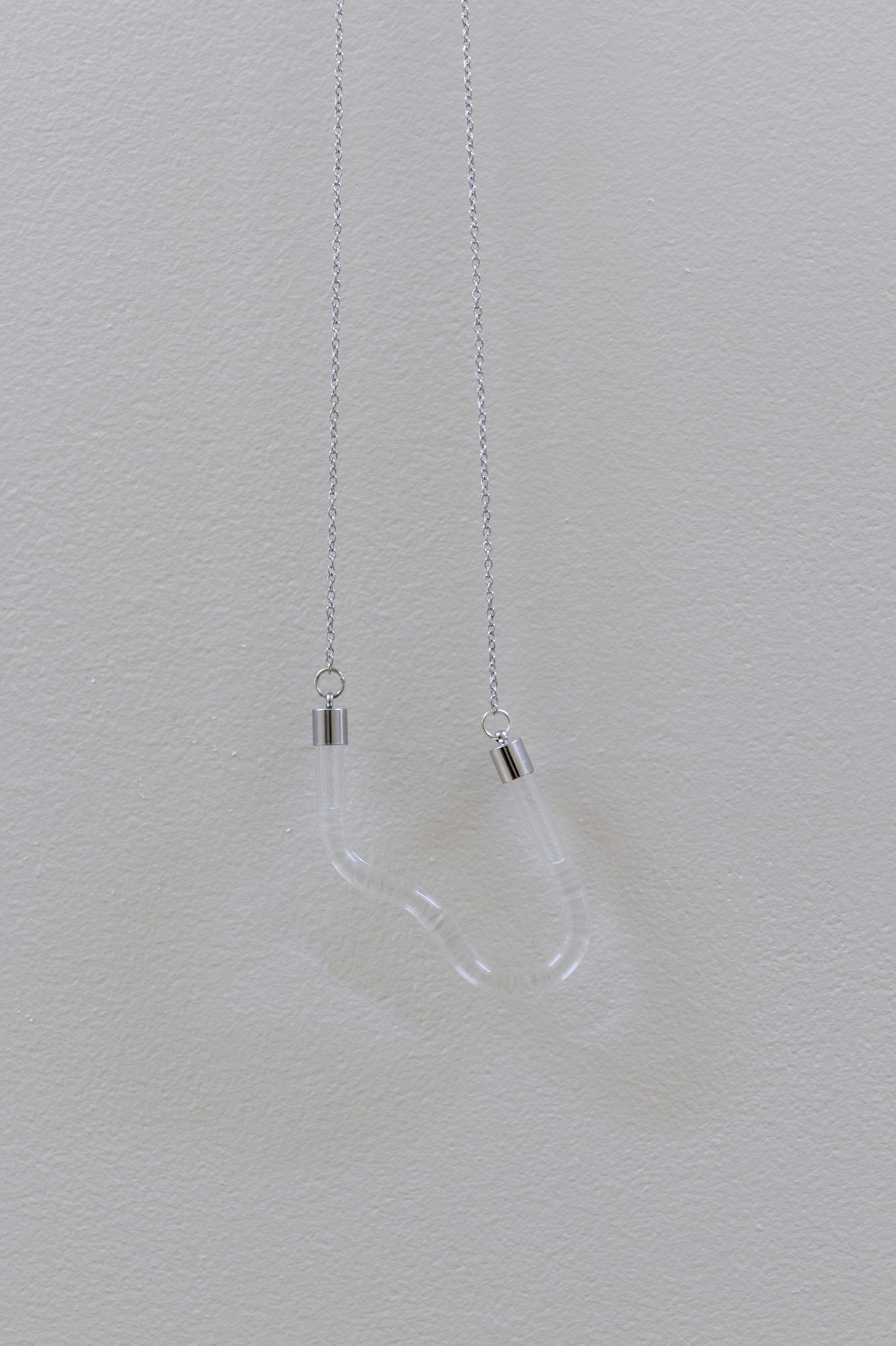 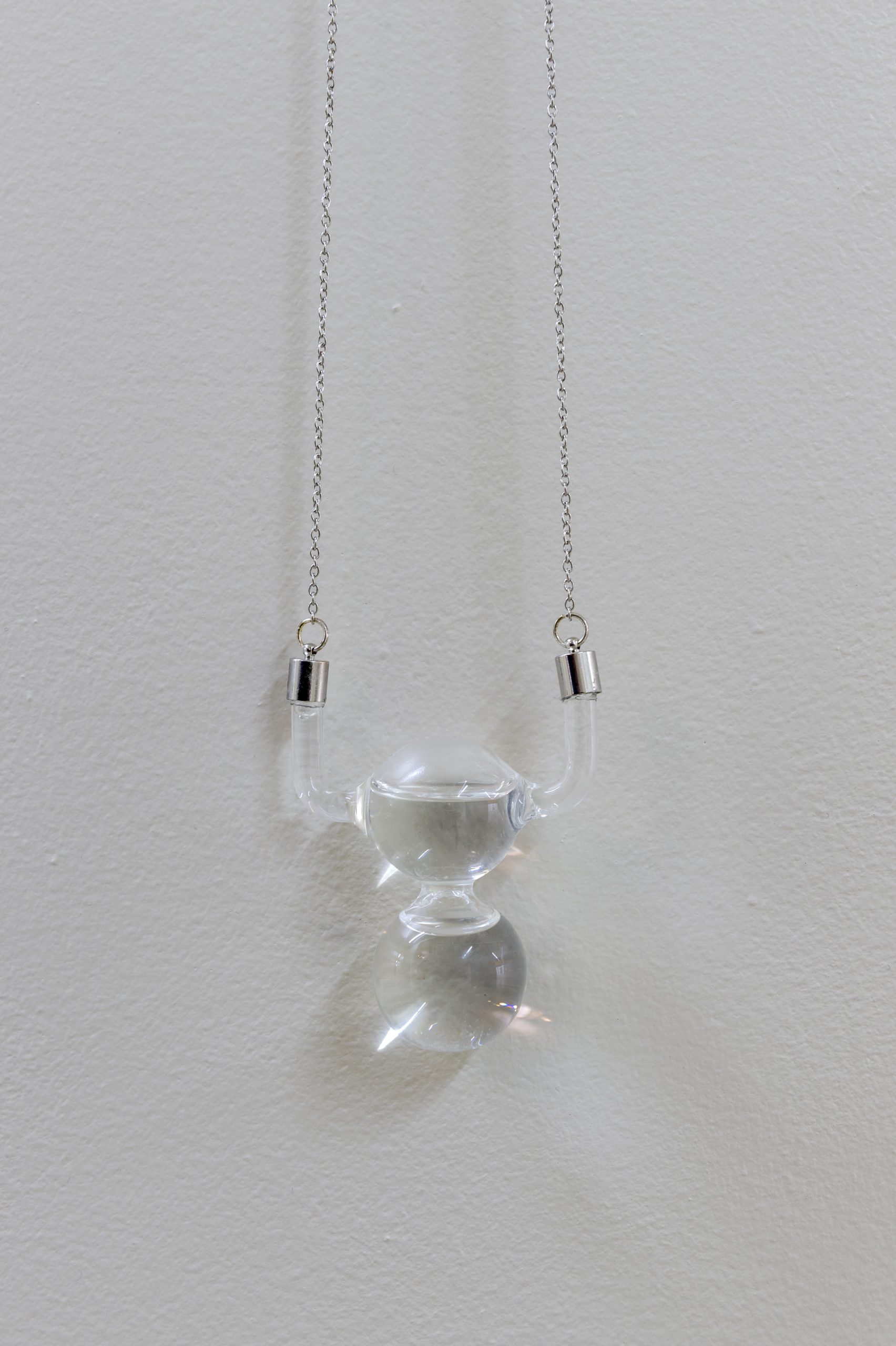 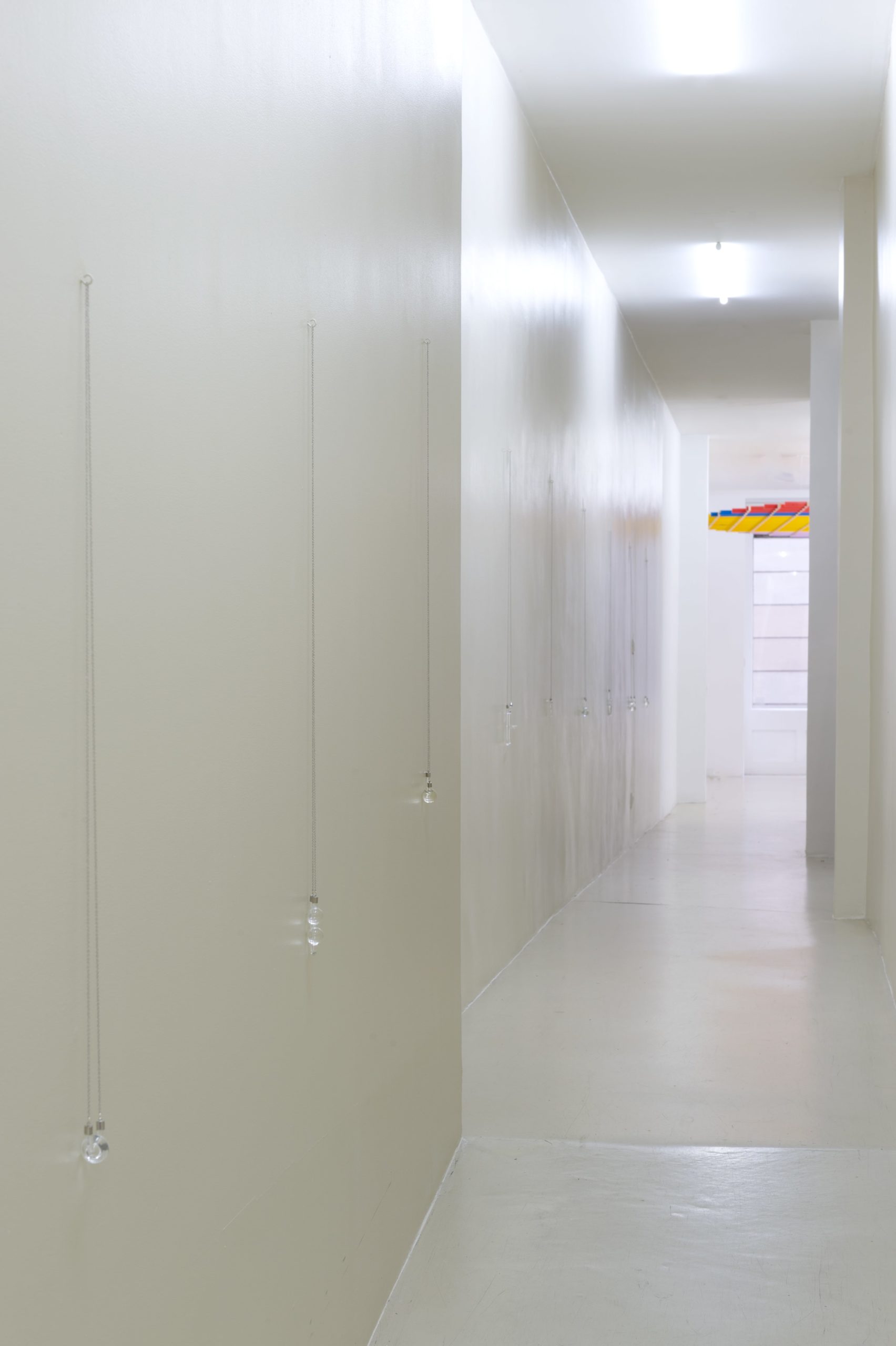 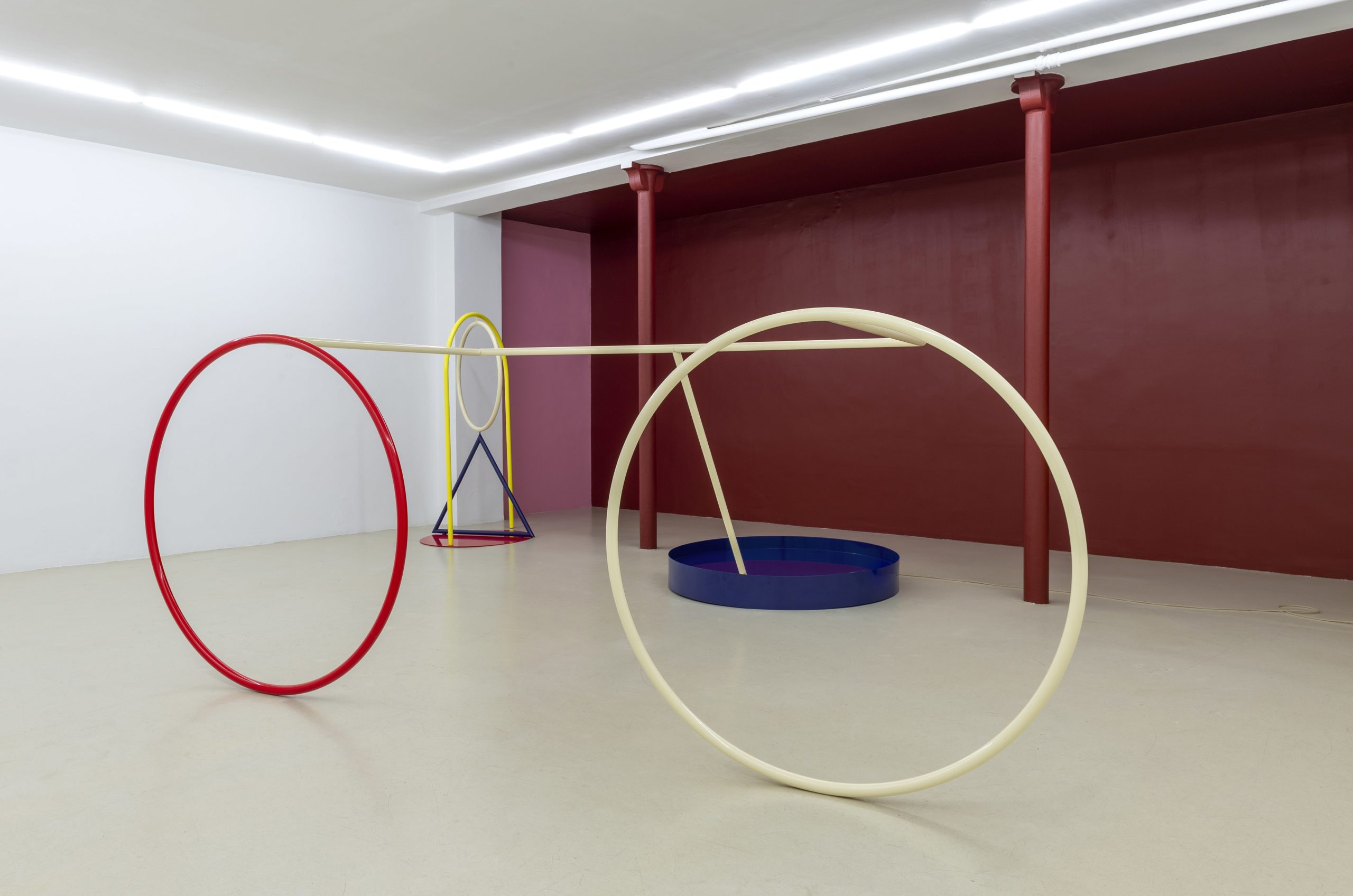 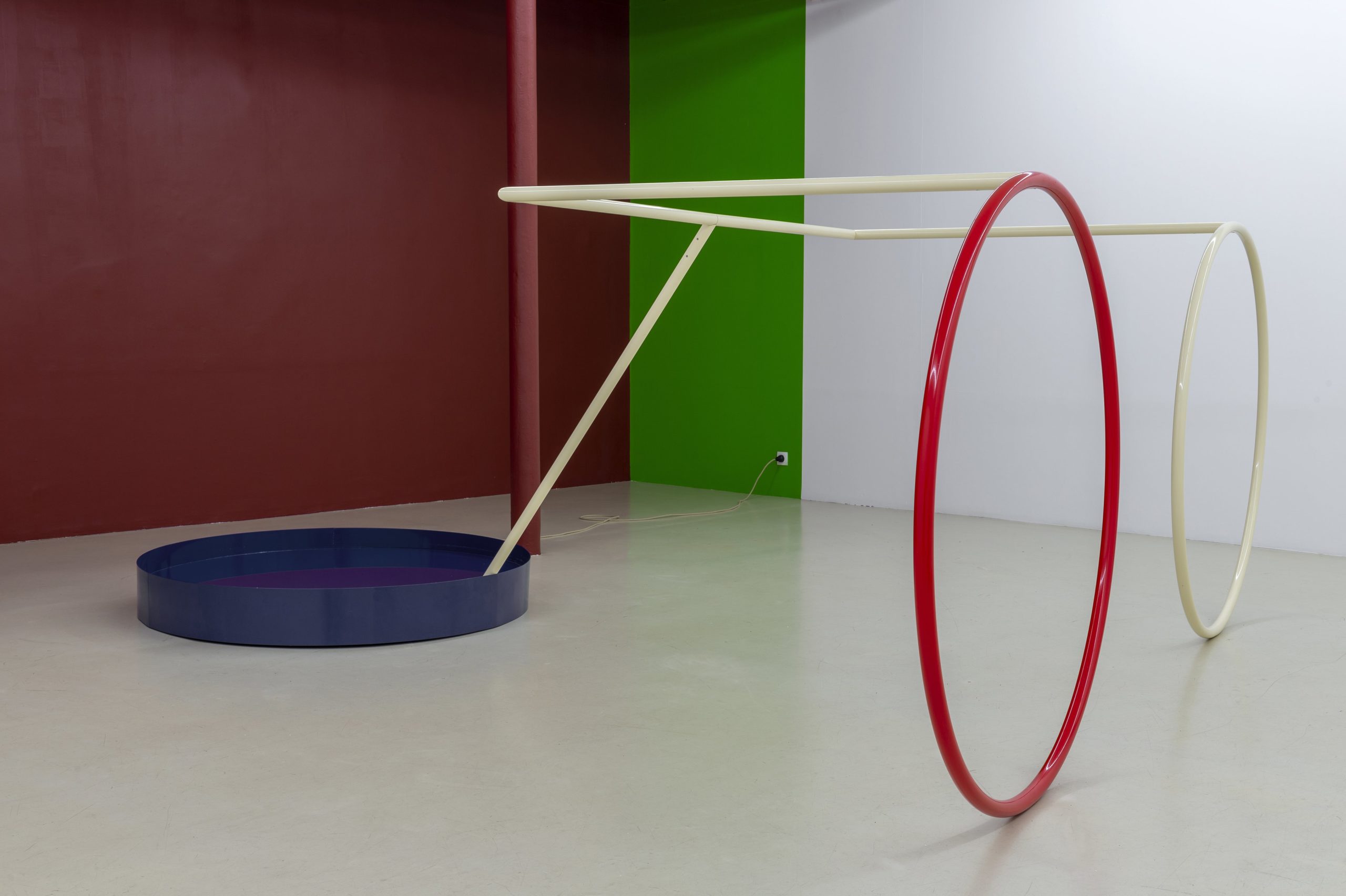 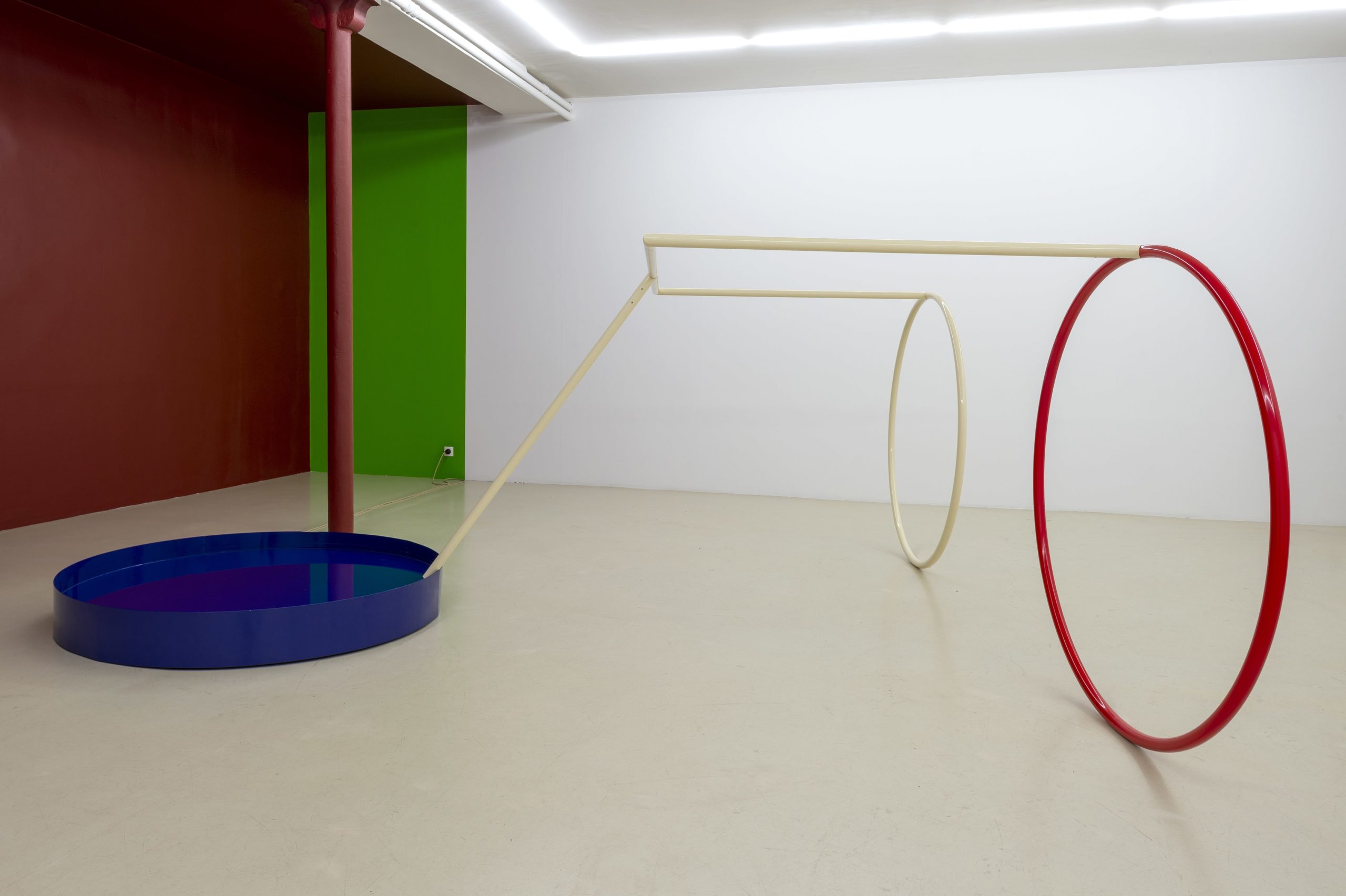 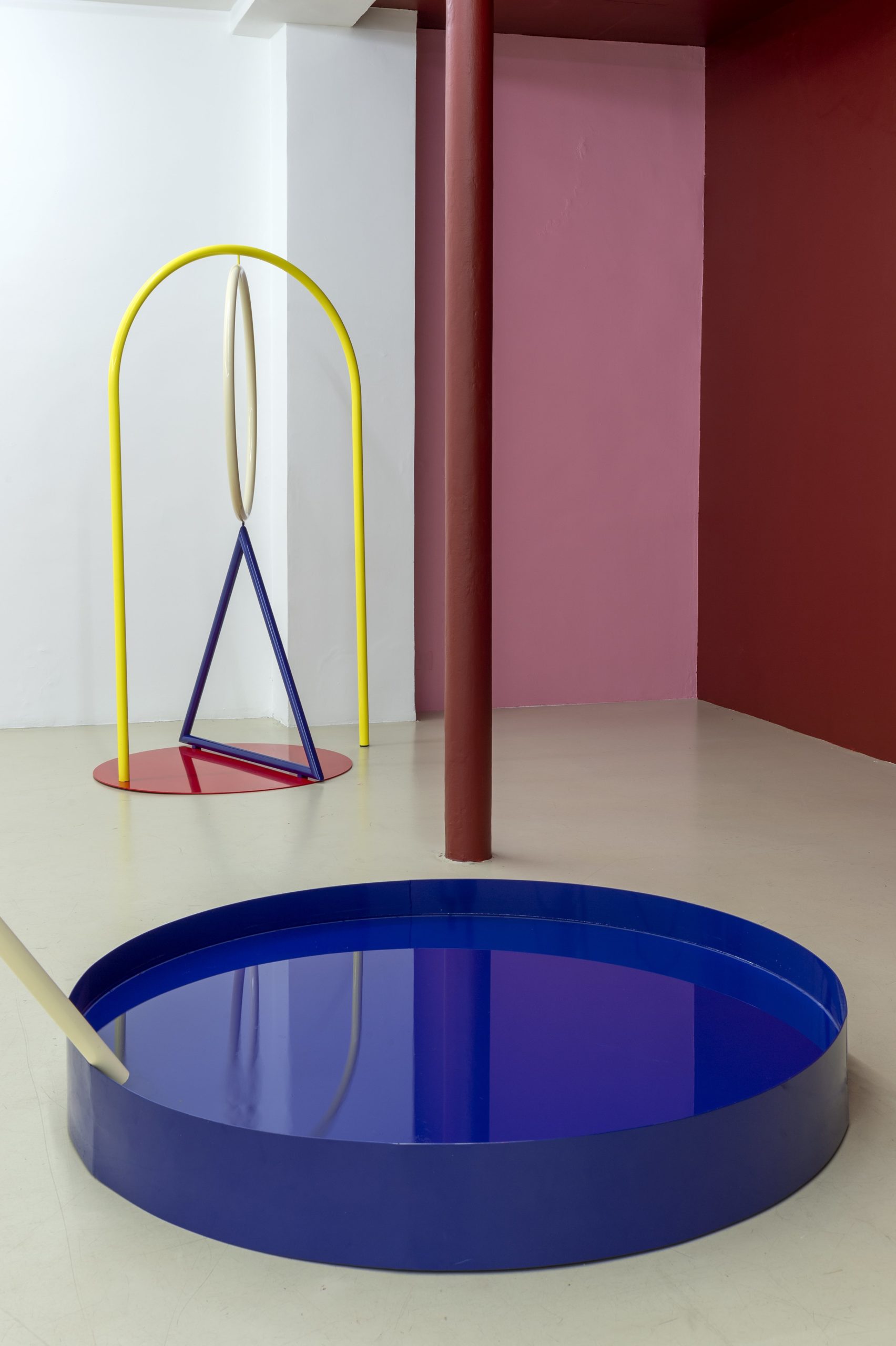 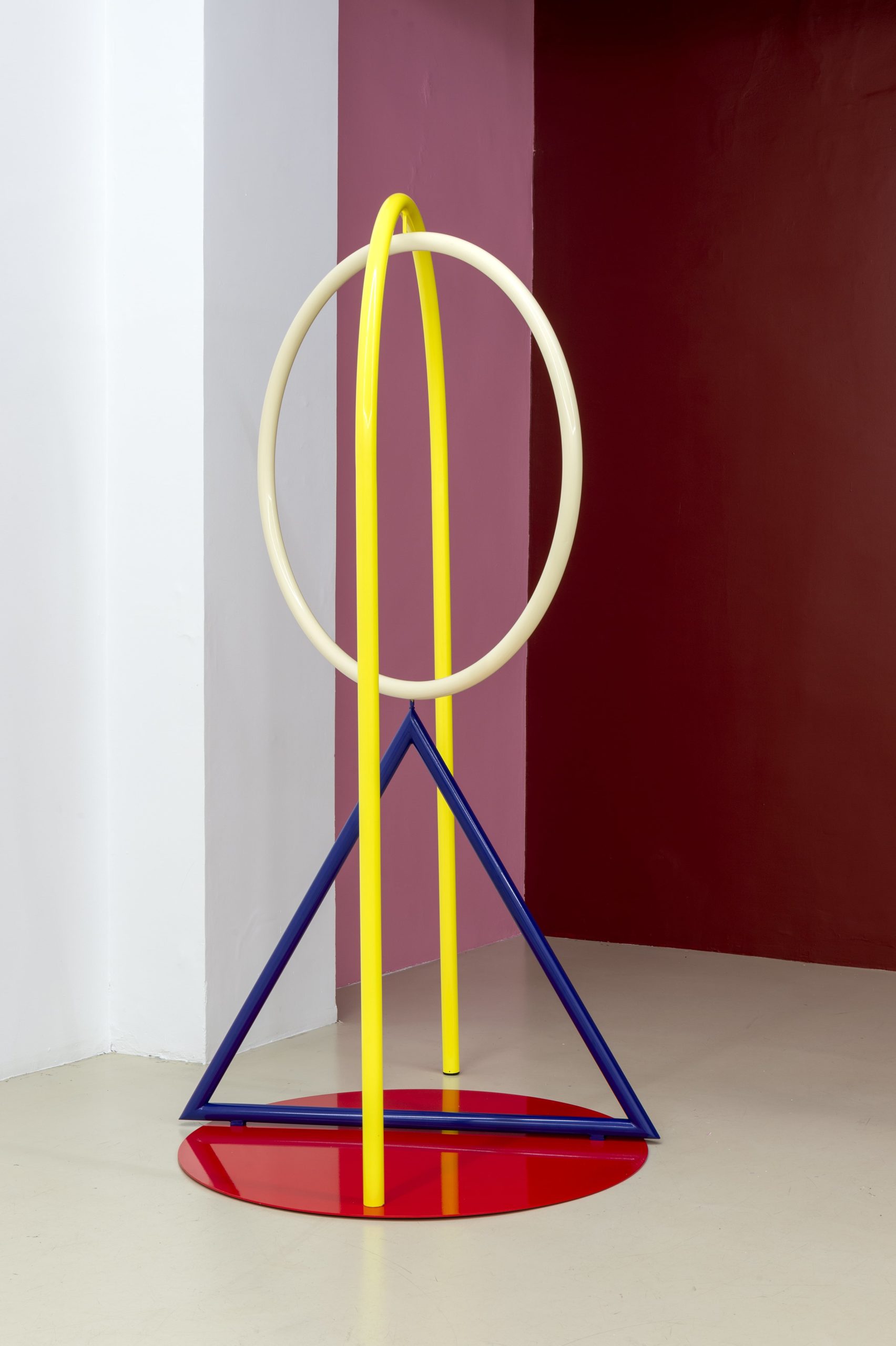 « Seulgi Lee confronts the public with a modernist symbol, taking a resolutely anti-narrative standpoint and singing the praises of flatness and frontality, in the galerie Jousse Entreprise’s space: an immense wooden grid is suspended from the ceiling. Here, Mondrian’s grid is observed from below and not frontally. Dozens of slats criss cross each other, hanging in air, recalling the Korean tradition of Moonsal (a lattice door made of woven wooden slats that delimits space in traditional houses); but also the interlacing lines of Chinese characters, and the geometric mashrabiya shown at the Museum of Wooden Arts and Crafts in Fez (Morocco) which fascinated Seulgi Lee during a visit in 2019. The audience wanders under the grid whose subtle gradations of color have origins, as diverse as an artificial waterway in the 8th-century Korean villa of Poseokjeong, a Roman fresco in the Villa Livia, decorative Dancheong paintings known for their sophisticated polychromy, and the waterways of the port city of Incheon. The grid can be seen not only from below but also from the side. Its shape and colors change as the audience moves around. This grid, which in the history of Western modernism celebrates the principles of autonomy and purification, now allows the vernacular and folklore to seep in, referring to various ancestral craft traditions all at once: Korean, Moroccan, and Roman antiquity, not to mention the Yellow Sea. Sometimes you just have to look up to travel in space, time, and from one field to another in art and popular culture. […]

Enveloping oneself in words and color is the ambition of U, a set of blankets that Seulgi Lee has been working on since 2014. These textile objects, made in the traditional Korean Nubi (padded quilt technique), are handmade, sewn line by line, by artisans in Tongyeong, according to a 500-year-old tradition. This quilting technique keeps the heat in by allowing the air to circulate through the relief created by the quilted cotton padding. These blankets were very common in Korean homes up until the 1980s. For practical purposes, the central part, on which symbolic animal figures were once sewn with silk thread, could be detached so that the cotton fragment in contact with the body could be washed. Then, in the 1980s, simple colored bands were used as ornaments. The colored bands gave way, in Seulgi Lee’s compositions, to a more complex geometry. Each cover is a translation of a statement from the oral tradition into a textile form. It «enunciates» in fact a popular proverb, chosen by the artist for its whimsical and humorous accents (the subtitles given to each U testify to this), through colored abstractions. To slip into the U, this letter with the shape of a receptacle, means at the same time to plunge into the Korean vernacular tradition, and to dream of these «tropes» in which, as the titles suggest, axes and foals meet. If these abstractions also reflect the ideal of fusion between art and craft envisaged by historical modernism, they reject, on the other hand, by their reference to functionality, the dream of pure, intransitive abstraction that formalism of the second half of the 20th century cherished. »

« You enter the corridor as if you were entering a gut. All along the way down are hanging water drops from rivers such as the Loire, the Rhine, the Ill, Sankt Jørgens Sø (Lake St. George), the Durance, the Seine, the Huveaune, the Isle of Women, Ocean Beach in New York or the Rio Tejo (Tagus), most of which were collected at the beginning of the famous pandemic by collaborating friends. At the end of the corridor, we are caught by a short chant that mixes a popular Korean-Japanese port tune of yesteryear. NANANI GONG-AL is a free interpretation of two traditional songs, the Gong-Al song from Incheon, Korea and the Akita Ondo song from Akita Prefecture, Japan. The Gong-Al song describing all forms and colors of the female sex (Gong-Al (egg ball) in old slang) after the sexual act, was sung during the making of the rope by women and men before going to work at sea. In the final room, two large, colorful wire installations stand. The sound of the small fountain mixes with the Korean song. KUNDARI TAUREAU is composed of long metallic tubes that draw an open loop in the space and seems almost invisible. The installation draws letters and figures of a woman’s body or her sex in the space, which is giant to say the least. »