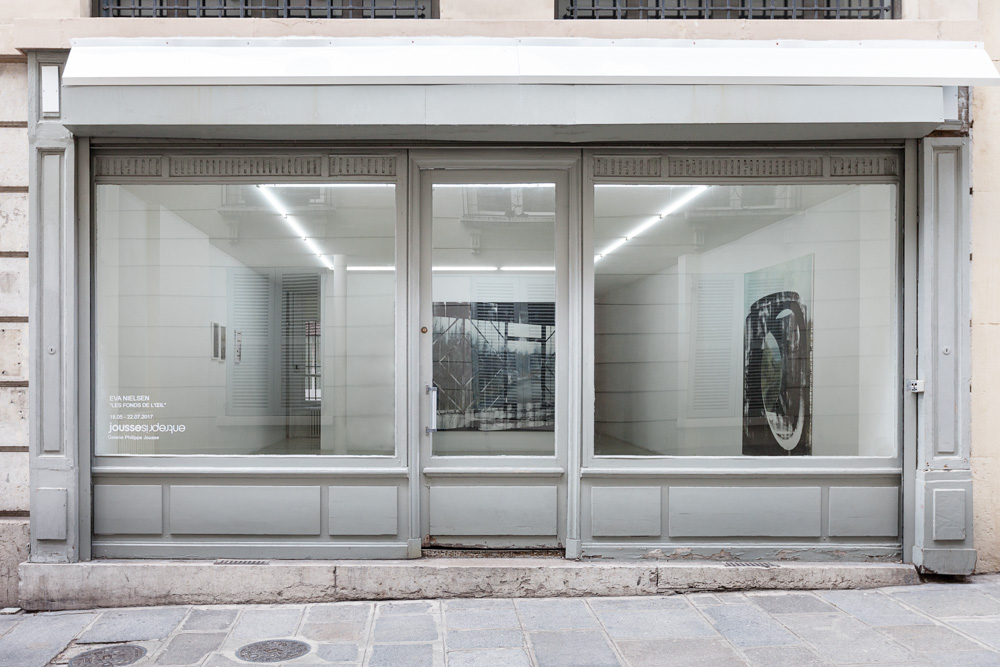 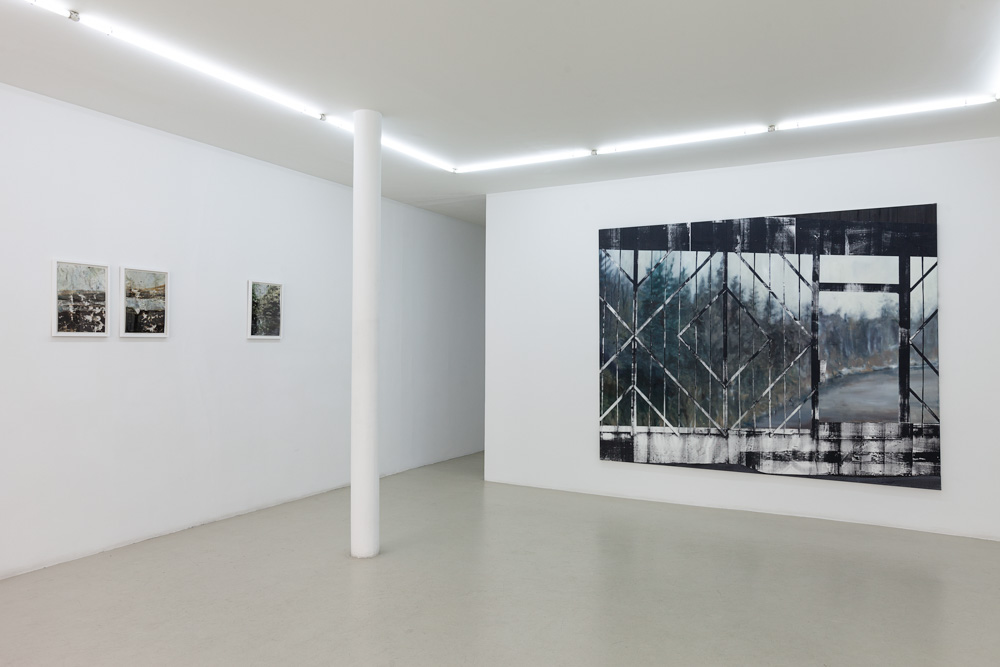 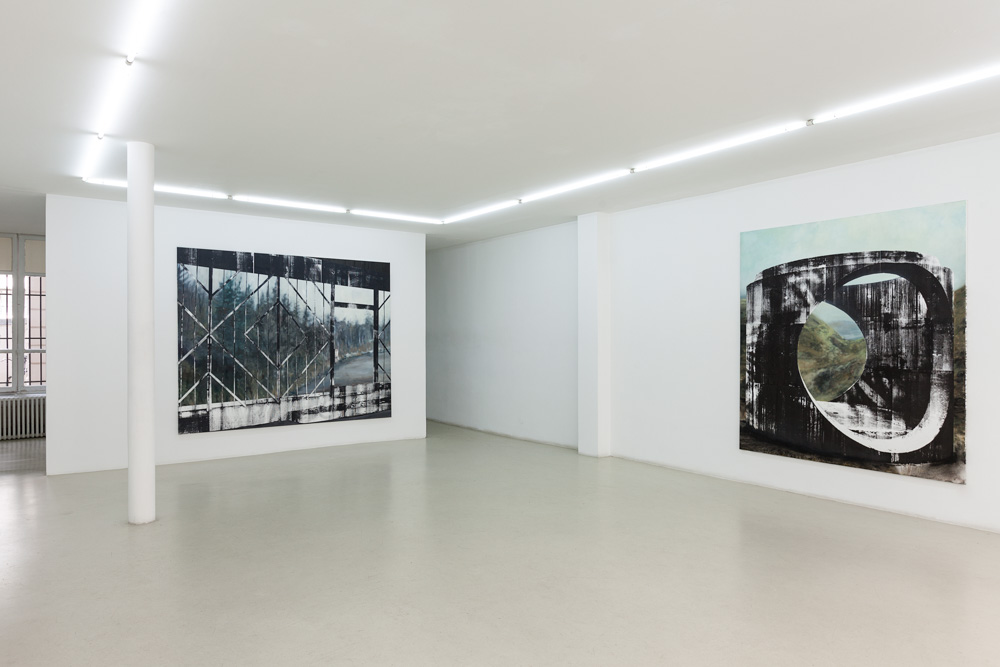 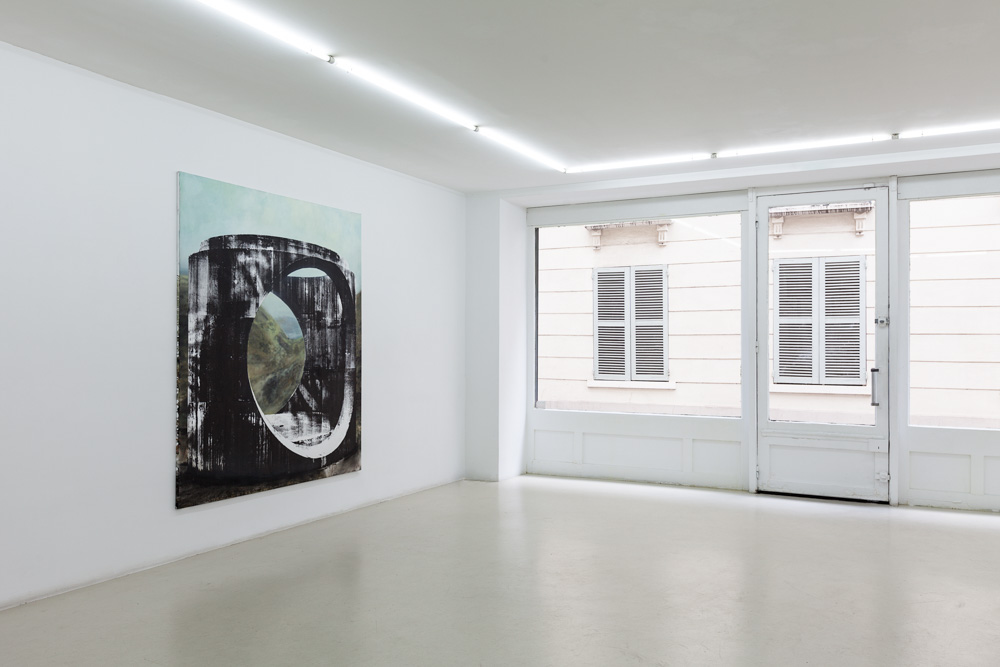 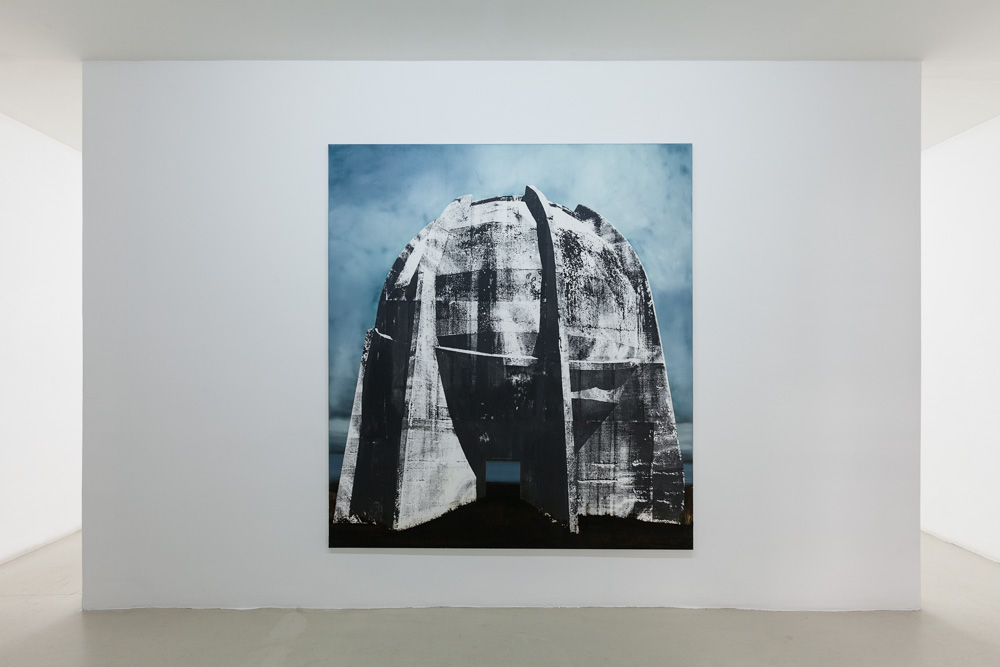 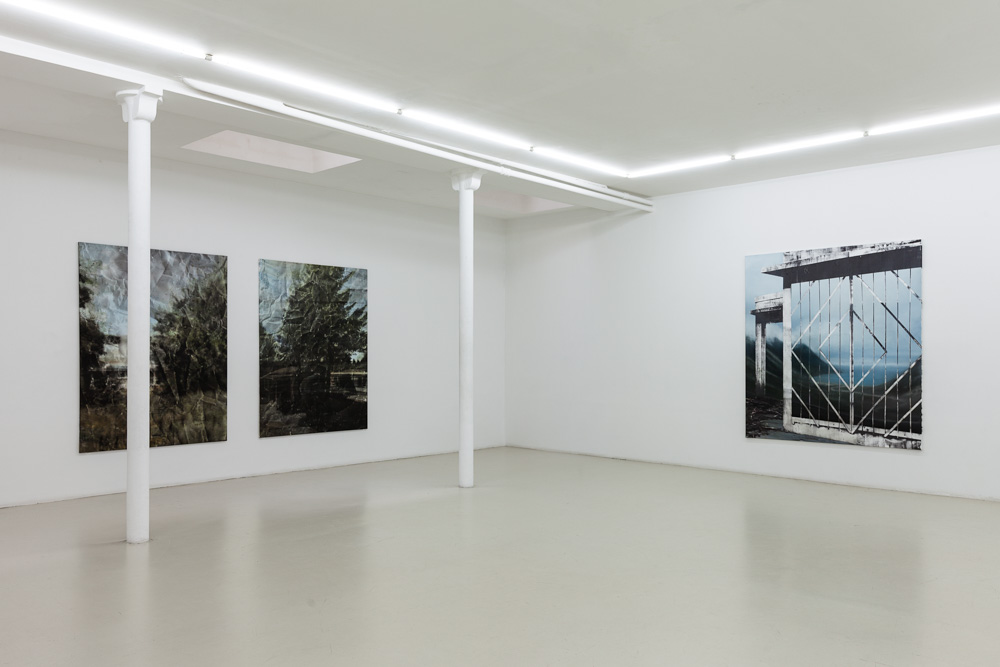 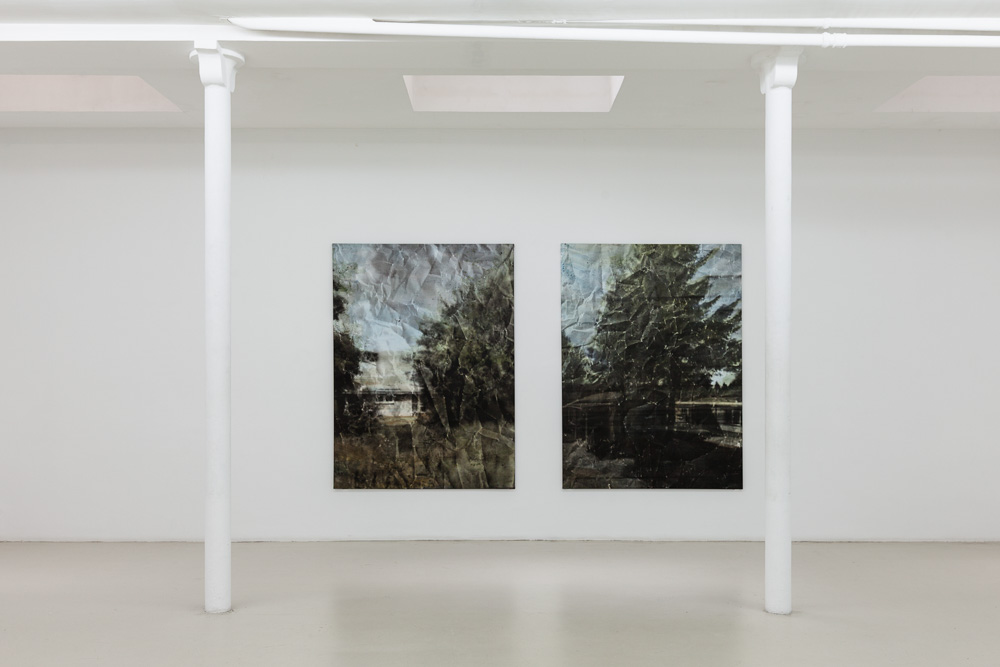 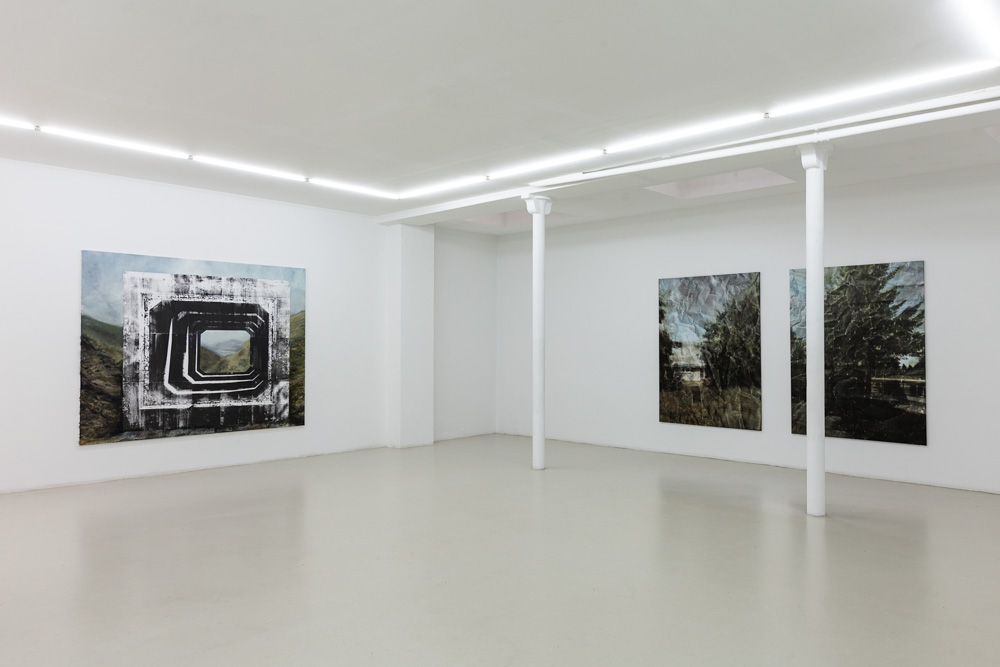 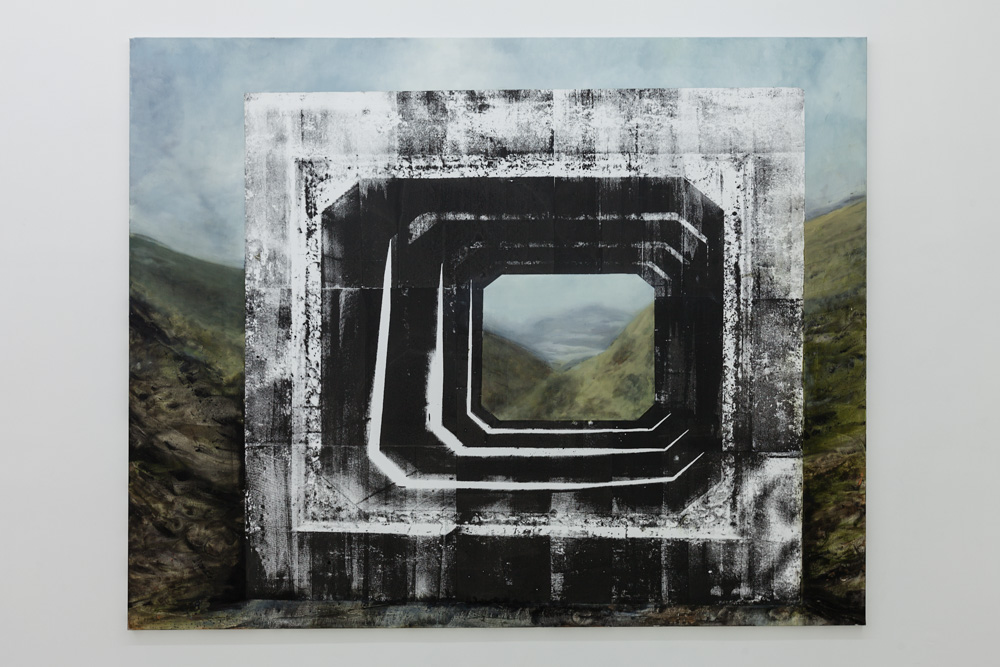 The power of illusion—which painting is probably an extreme and archetypal form of—lies in this meeting of opposites: uncertainty and virtuosity, fuzziness and precision. I do think this is what fascinates us in the mirage and the oasis, beyond our own desire to believe in it: that sudden appearance, in the middle of the desert and flatness, of a true chunk of reality, with palm trees, the sound of flowing water, and the promise of rest. That appearance is not so much optical as mental: we need it in order to move forward, to get beyond ourselves, to believe in it again, and to curl up in it, even if this means losing strength and lucidity. It is situated where the pupil and the neurons intercept: scopic impulse and cerebral self-persuasion brought together “in the best of all possible worlds.” What if the waterfall and the origin of the world in Marcel Duchamp’s Étant donnés 1° La Chute d’eau 2° Le Gaz d’éclairage (1946–1966) were in the end just a mirage, out of place in the Swiss mountains?

In this exhibition of recent paintings (all from 2016–2017), which espouse different technical and illustrative styles—styles the artist methodically extends—Eva Nielsen is pursuing this quest: giving form to illusion, to visual mirages acting as much on the retina as on the intellect, to the surface of our eyeballs as much as to the backs of our eyes. These mirages take on changing looks: sometimes, they are concrete architectures, proud of their monolithic forms, filling the space, and whose immanent certainty constructs the landscapes they almost invade; elsewhere, they are genre scenes, layered with endless folds, kaleidoscopic, breaking the linearity of reality. These latter, perhaps marked by the human adventures taking place in them, reveal their narrative, cinematographic potential.

You suspected as much: I totally go along with this, these oases of painting, happy to lose myself in the effect of a glaze, the stratification of a composition, the covering up of a silkscreen print, a framing that is sometimes brutal, at others off-screen; delighted to alternate close-up vision, as if with a microscope, when the eye panics in contact with elementary particles, and a faraway viewpoint, as if I were dominating that “pictorial battle” being forever recommenced. As usual, Eva Nielsen is not trying to imitate a reality which the eye might discover on its own, but offers us precipitates of her visions, of collages of forms, atmospheres, and landscapes perceived, photographed, gleaned, and then re-created. With their watery mineral reality, the landscapes of La Loue painted by Gustave Courbet—another painter of scopic impulse and waterfalls—froze both views of the Jura and a certain idea of nature, “immaculate” but always changing. Eva Nielsen’s paintings offer a certain idea of vision: made up of bedazzlements, discrepancies, and cascading viewpoints. The white escapes from its “reserved” zones to produce violent flashing. The metal trellis changes from architectural motif to all-over structure. Nielsen’s subjects, which are deliberately unattractive, see the standard pitted against the anecdotal and the unrecognizable, in a permanent back-and-forth between scales: the technical scale for of the plumber’s tools and the larger-than-life scale of the Land Art artists.

When the traveller reaches the oasis, his retina hallucinating, he starts looking for shade and water. You will find water here in quantity, covering almost everything in its passage. On the other hand, shade never ventures too far. It is always midday—a wet midday, to be sure—in these “peephole” works. Traps for the eye; receptacles to project yourself into; cognitive instruments. A mirage, even without sun or seduction, remains a peerless temptation. Rain, sullen trees, the impression of night arriving, these bachelor pavilions which irresistibly draw us towards them heighten the mysterious potential of the mirage, as if it were just a first stage before going any further, to the back of the canvas, and to the backs of our own eyes.