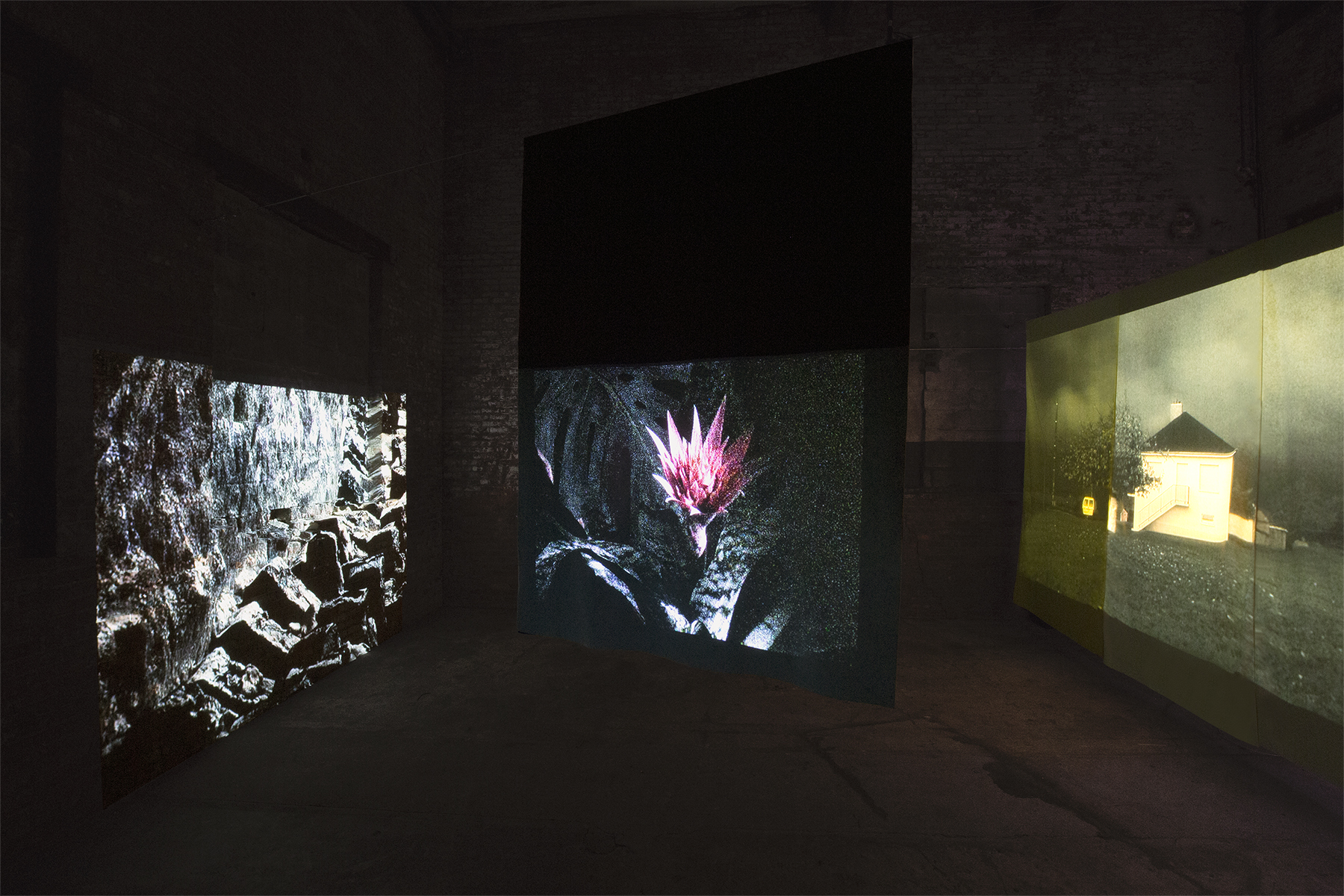 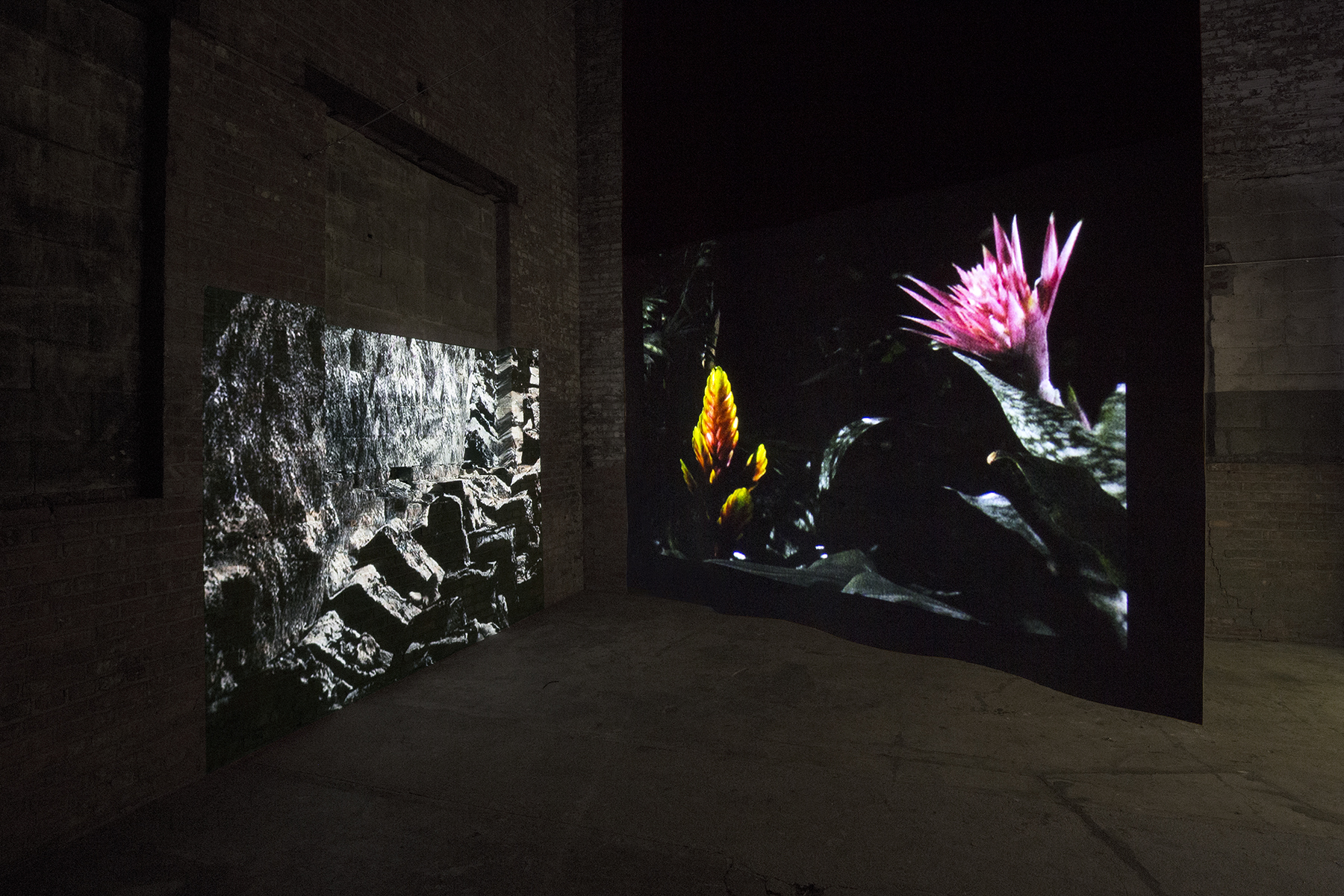 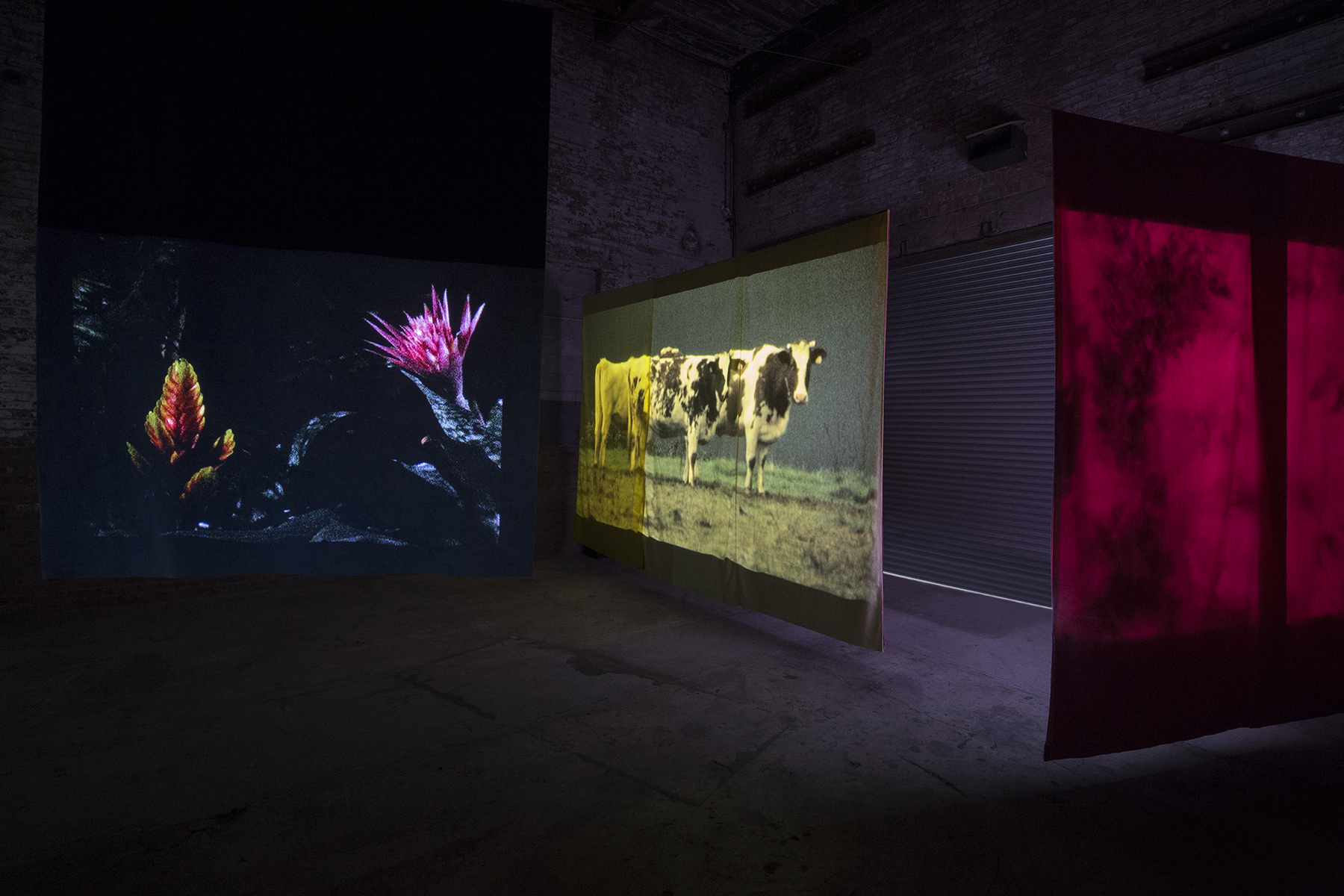 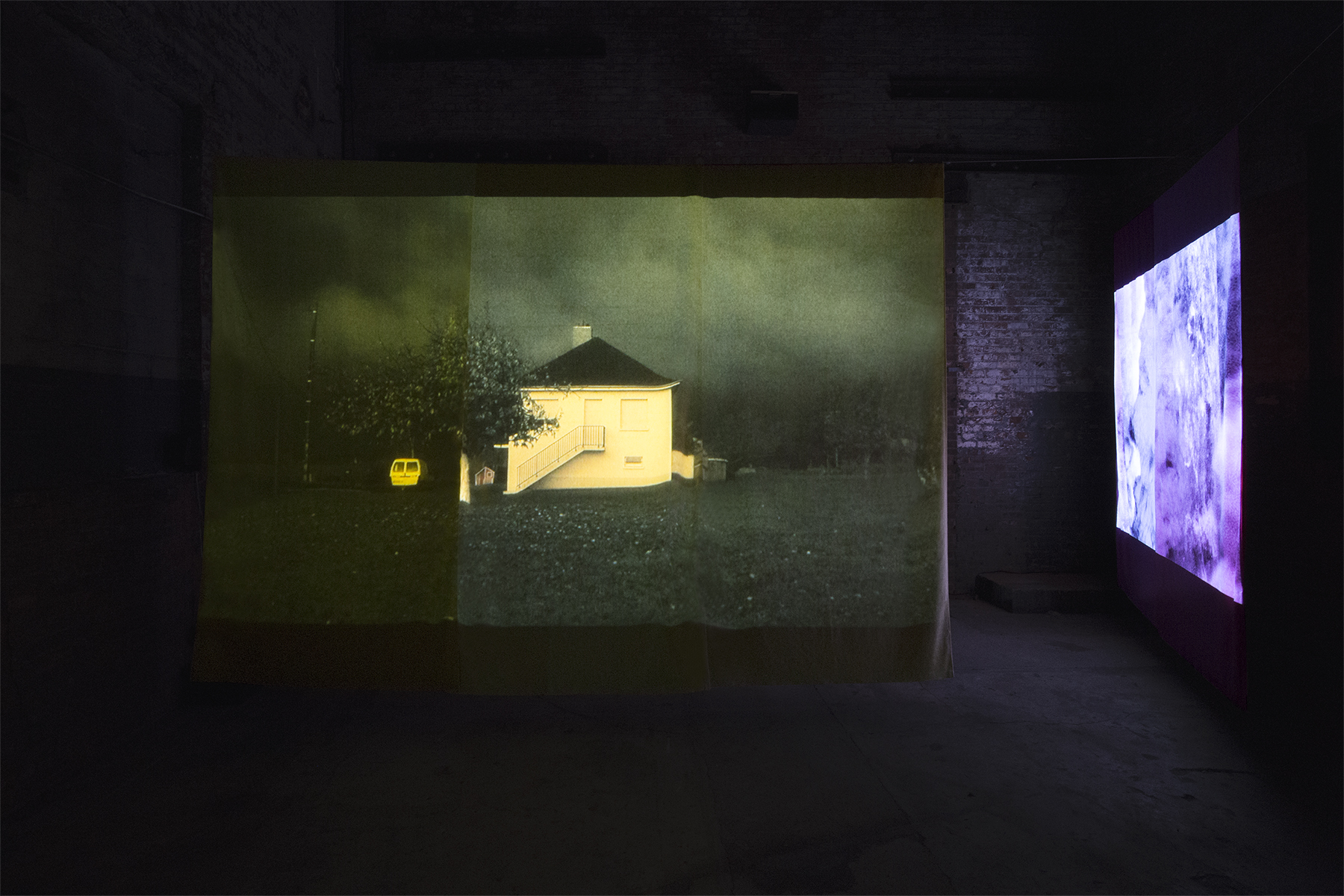 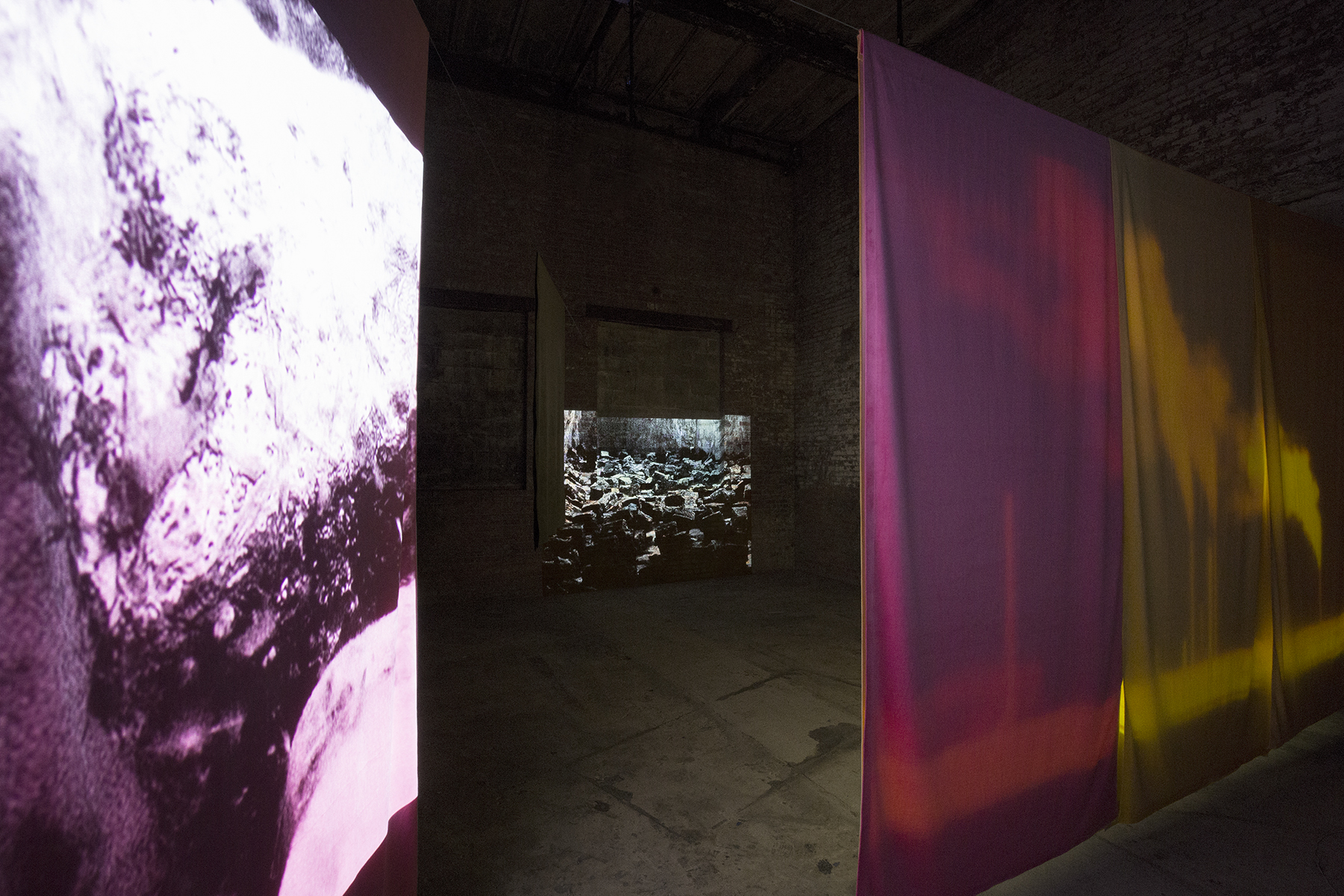 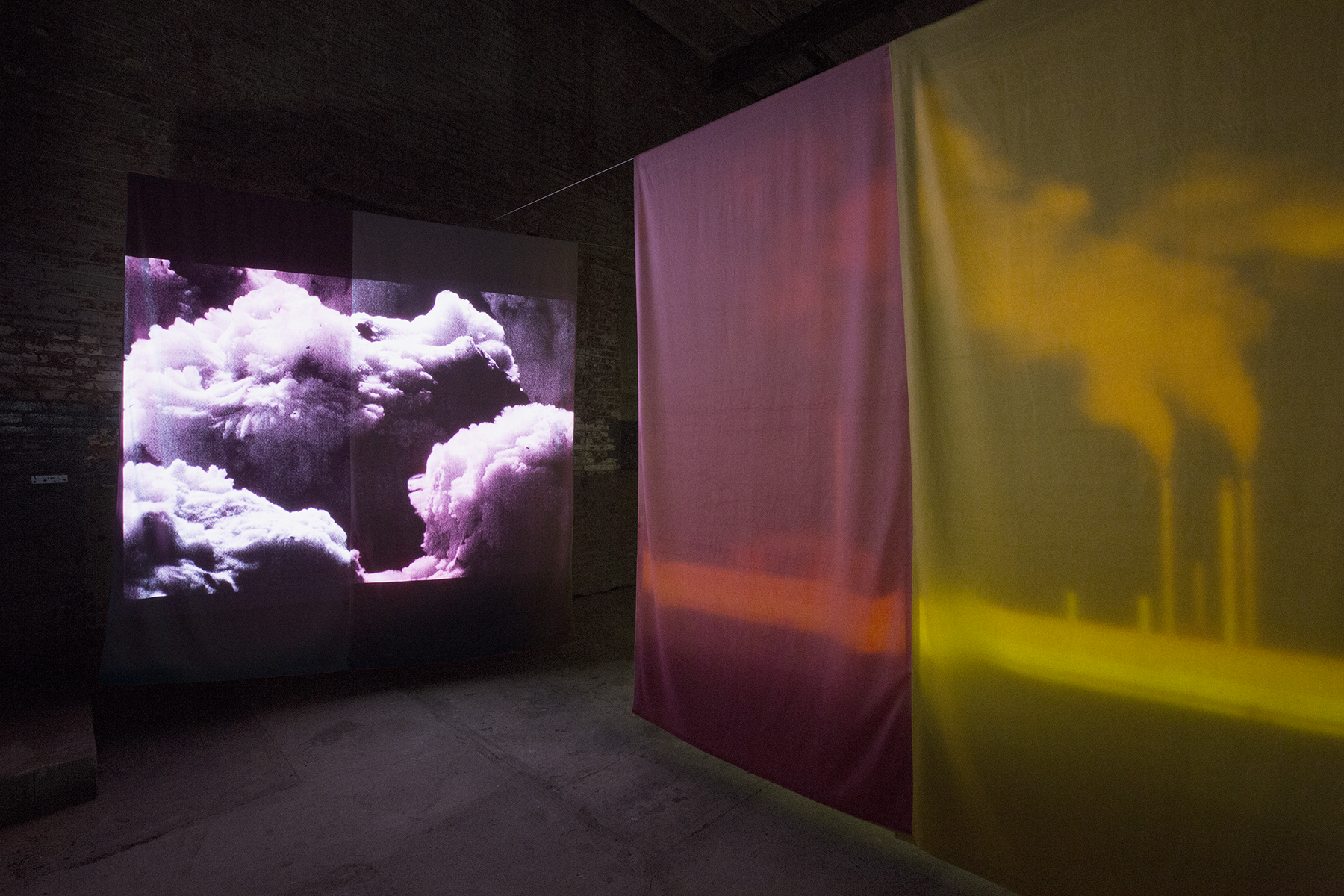 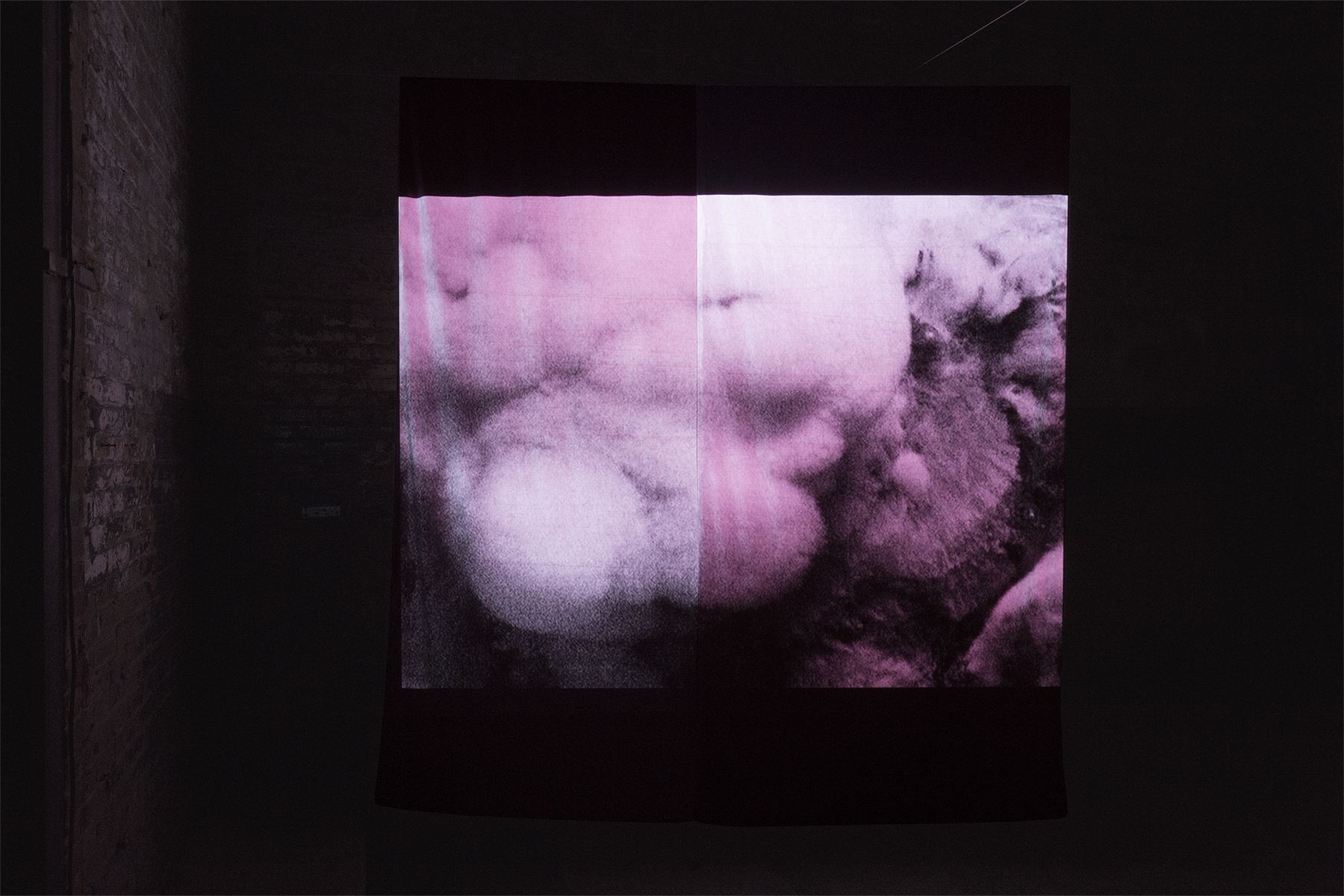 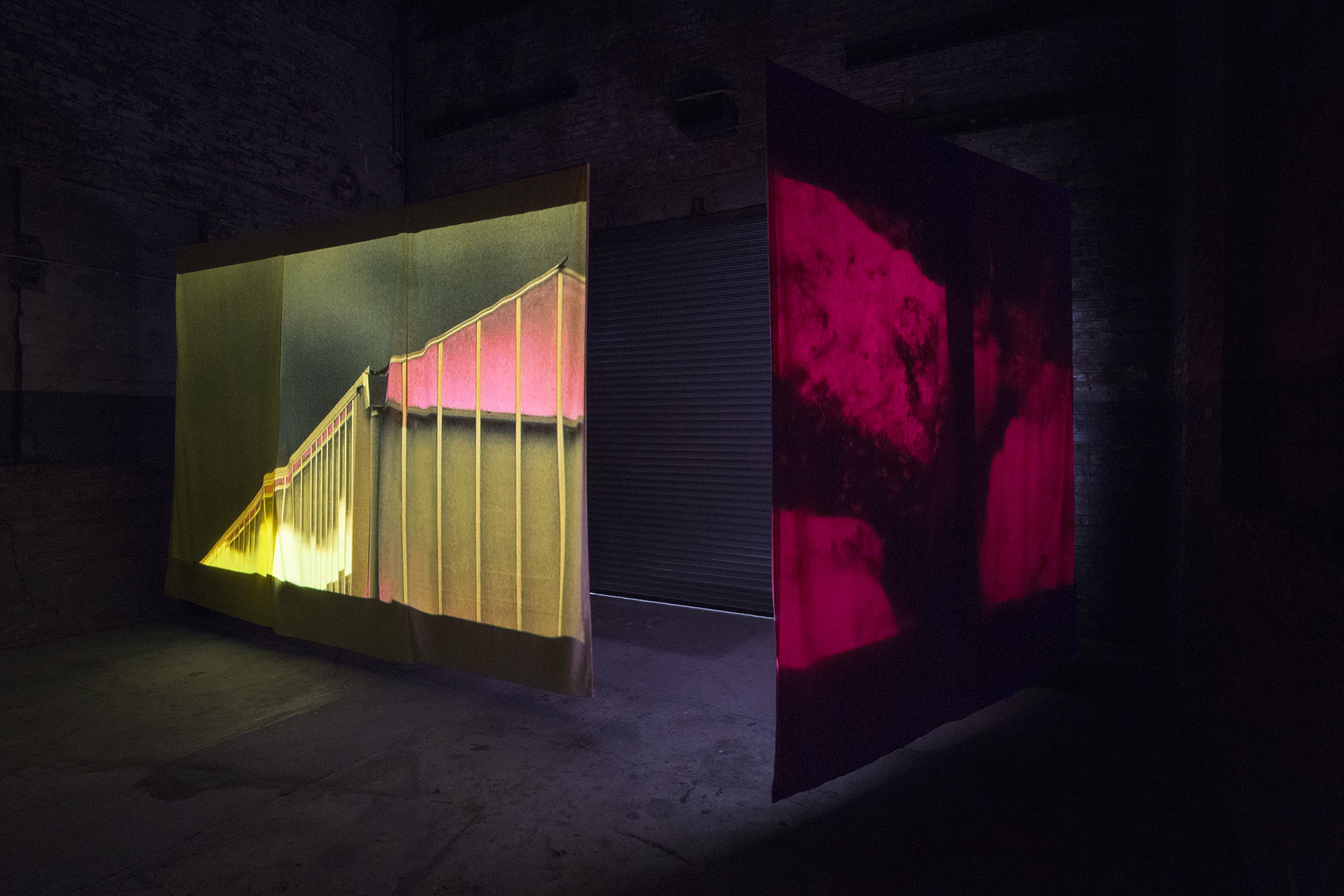 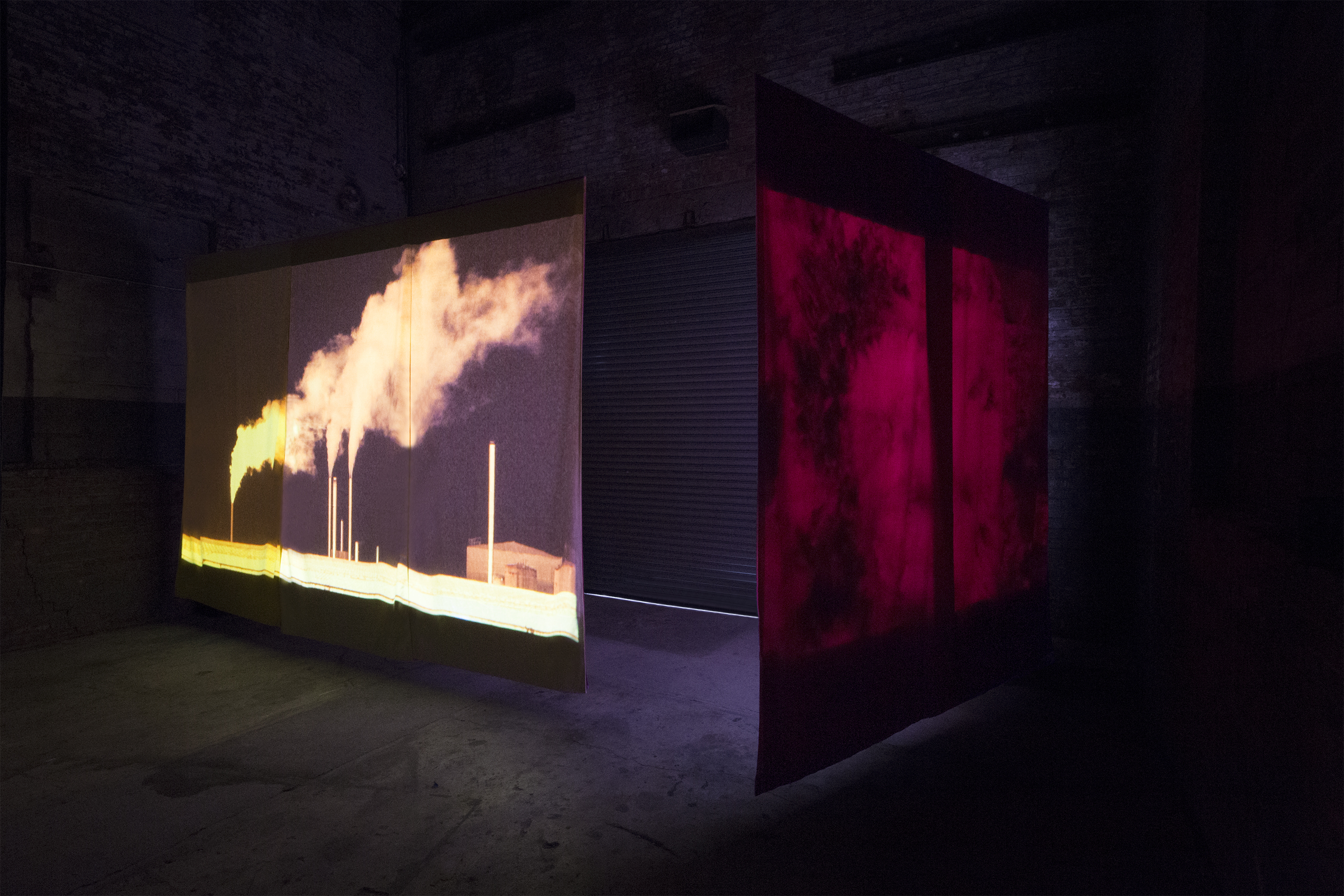 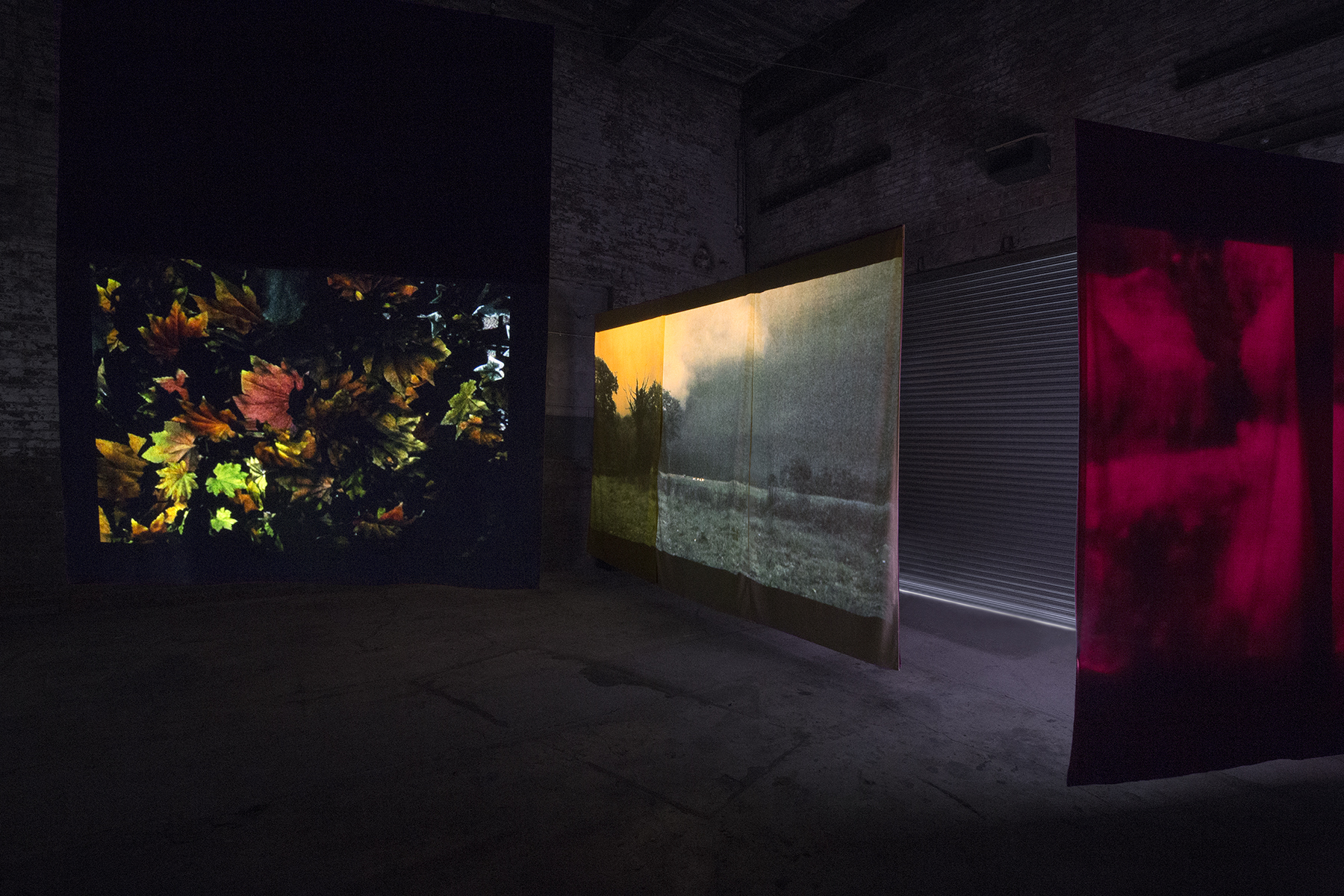 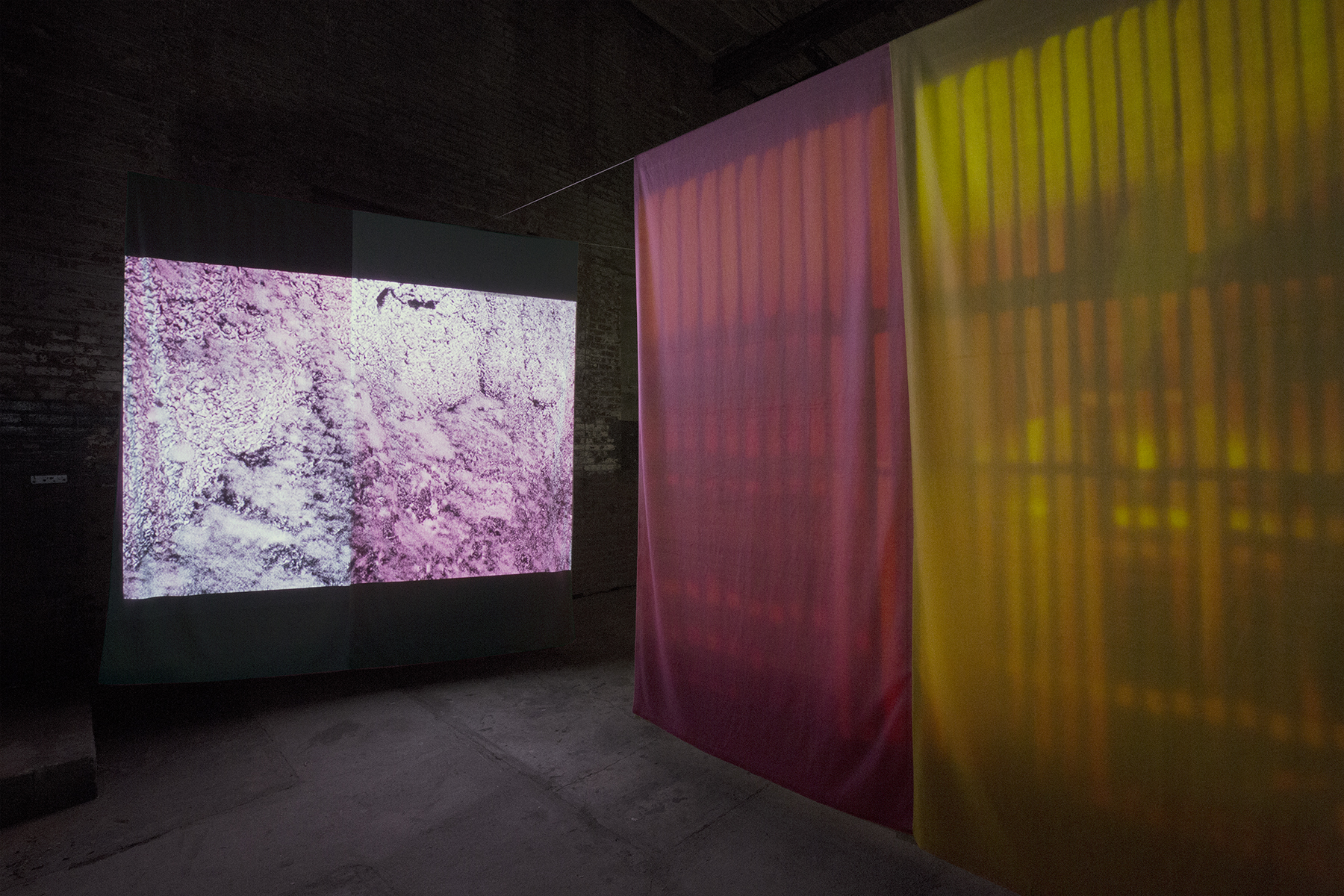 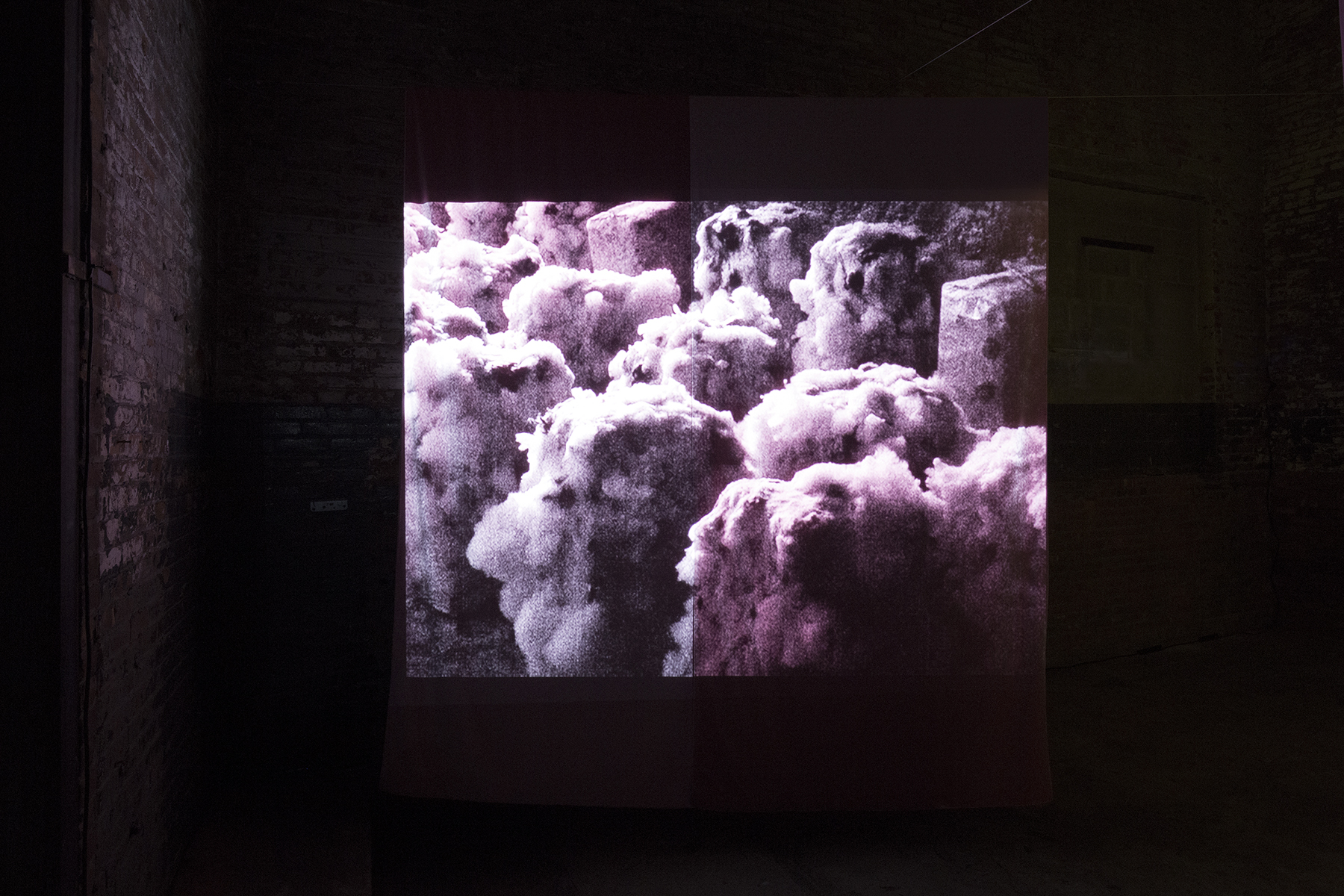 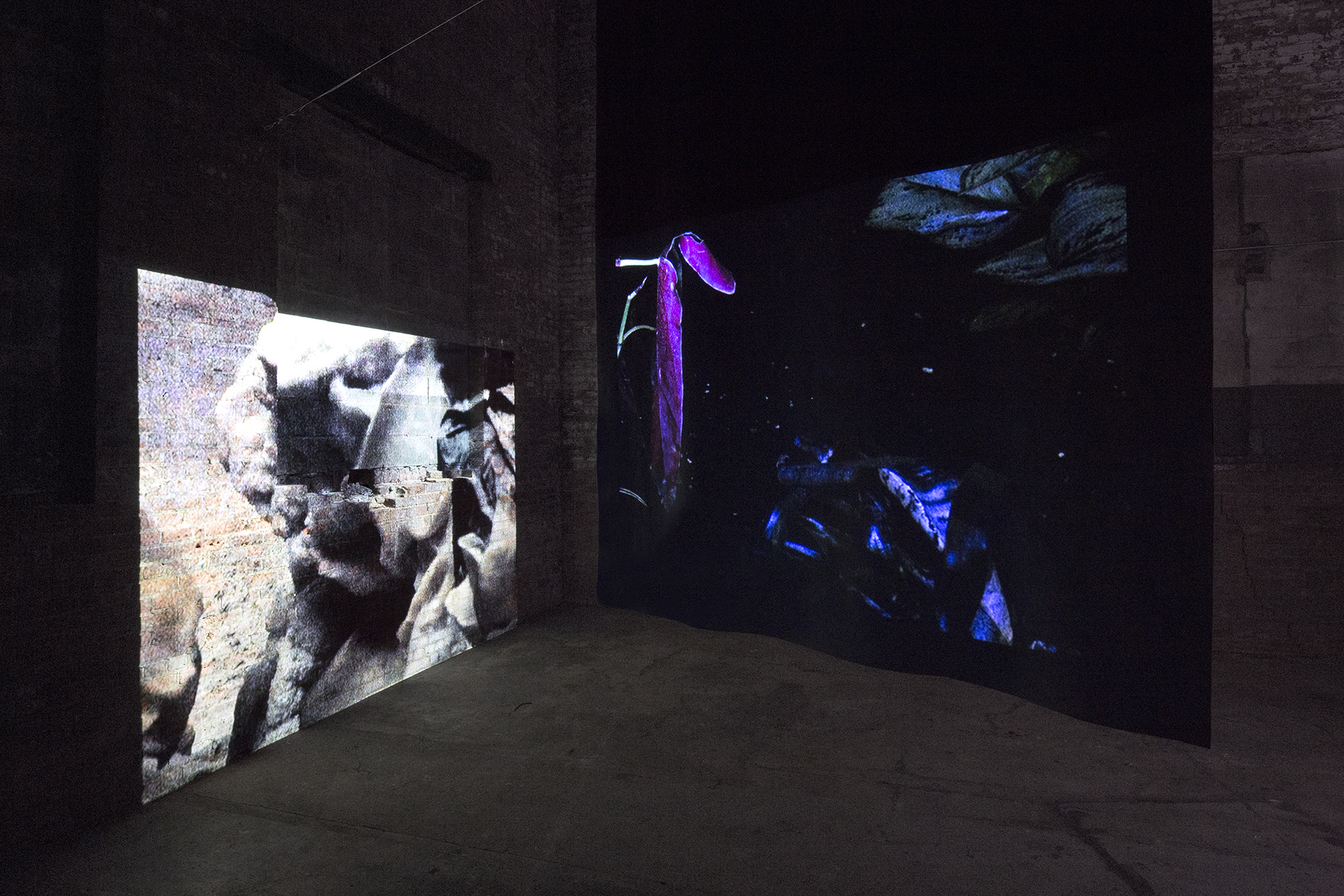 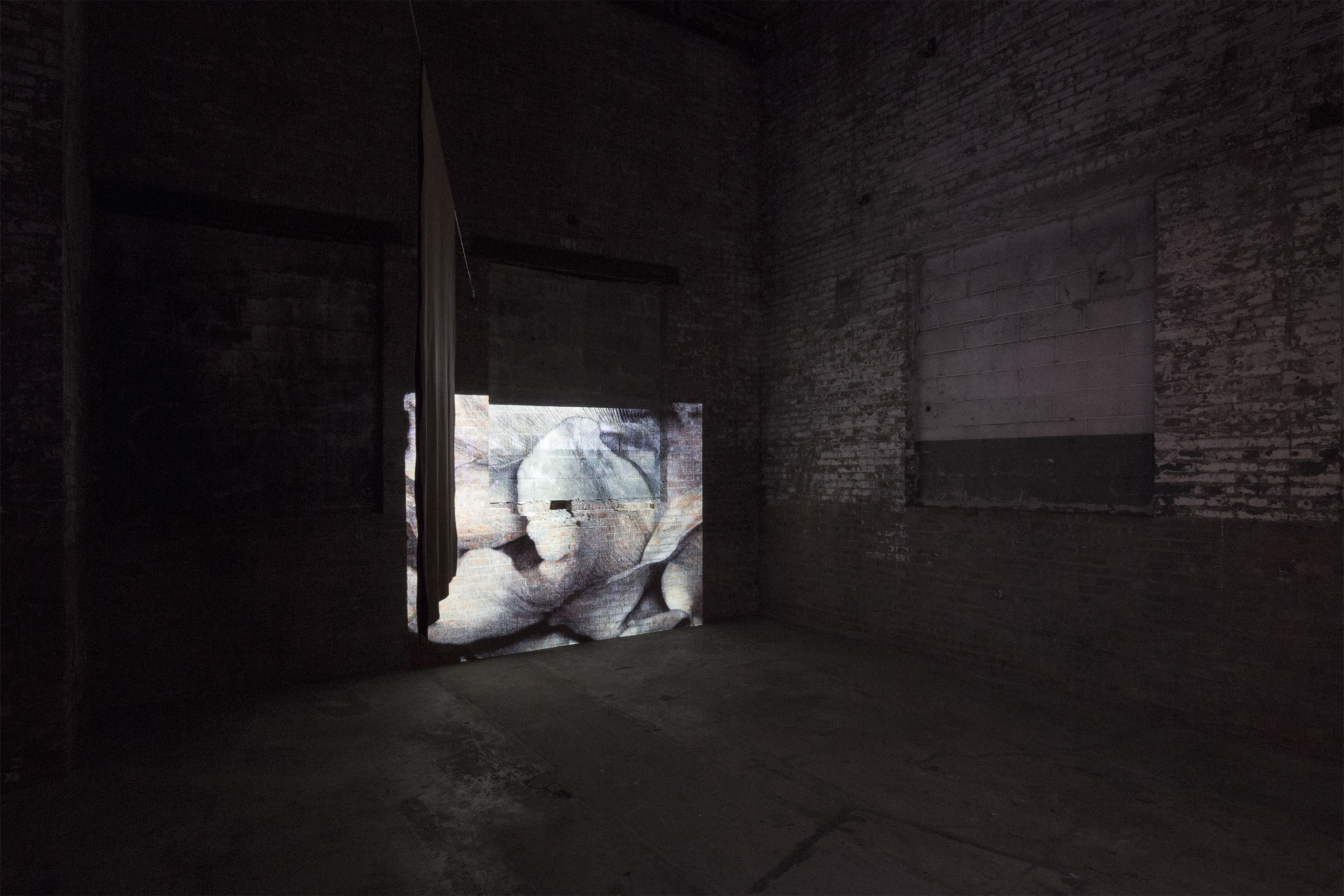 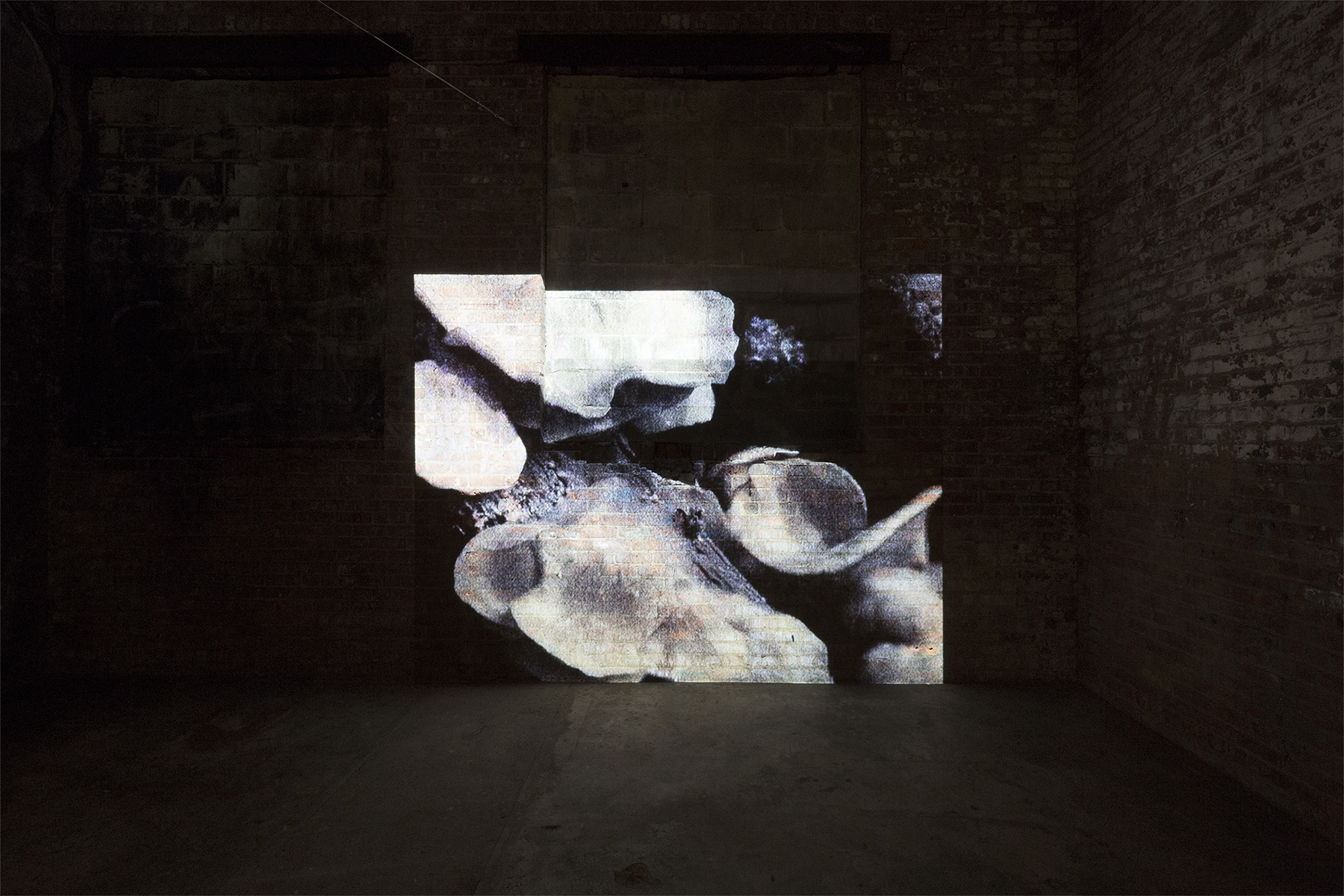 The Chimney is pleased to present Jacklighting, the first solo exhibition of French artist Anne-Charlotte Finel in the United States. Jacklighting refers to the nocturnal hunting practice of shining bright lights into a dark field in order to momentarily blind and stun animals. As if operating with a similar unnatural lighting system, the artist records transitory and ambiguous spaces through the lenses of her camera. In three video projects, Finel captures urban, rural, and underground landscapes that resist clarity and intelligibility. She experiments with architectural broad shots, close-ups, and microscopic scale. Installed at different angles, heights and on various surfaces, the works on display at The Chimney explore the malleability of pixels, the abstraction and limits of perceived images. The installation is accompanied by a sound piece by electro musician and artist Luc Kheradmand, Finel’s longtime collaborator. Amplifying the vibration of the images, the soundtrack borrows from machinery and synthetic noises to accentuate the viewer’s physical immersion.

In Jardins (Gardens) 2017, Finel descends into the subway to film an underground tropical greenhouse installed next to the platform. Behind the glass wall, with reflections of the trains roaring by, exotic plants stir in and out of darkness to briefly morph into glowing foliage. The stillness of Chinese fan palm trees and faux split leaf philodendrons is disturbed by flashing lights, turning their leaves a luminous green. Bromeliad plants suspiciously radiate in contrast to faded and greyish blooms in an aggregation of pulsing pink bracts and fluorescent bursts of red and yellow Flaming Sword. Lighting devices are gradually revealed, hidden on the ground or exposed as artificial suns. Human presence is signified by fast moving shadows on the glasshouse walls, culminating in a stroboscopic effect. Isolated and deprived of natural light and wind, the man-made jungle is a mise- en-scène; a diorama staged to alleviate the anxiety of daily commuters. In one shot, the plants’ silhouettes are confined to a 2D flatness. Behind the screens, they become Art Nouveau motifs, a wallpaper of endangered and powerless species.

In Triste Champignonniste (Sad Mushroom Farmer) 2017, Finel films a mushroom farm located in a former underground gypsum quarry. The videos are presented as a slideshow in a diptych format. In one series, doughy and stringy black and white surfaces alternate with bursting shapes that evoke foggy landscapes, smoky clouds and putrefaction. What resembles mushroom clouds in stop motion simultaneously recalls the archival Navy footage of underwater nuclear bomb tests in Bruce Conner’s film, Crossroads. The second video features unidentifiable geometrical masses, reminiscent of desert landscape and cracked earth. The colors of these cool white mounds gradually verge towards a dull yellow. Rather than being confronted with identifiable growing crops, viewers might be witnessing a micro-cellular activity. A disease has spread throughout the farm rendering it no longer arable. The digital noise generated by Low-Light filming strangely activates and belies the stillness of the image. Actual rotting and decaying elements become intertwined with the deteriorating pixels in a metaphorical decomposition of the image.

In her most recent work, Hors-sol (Hydroponics) 2019, Finel has filmed a tomato greenhouse. The intensive crop cultivation is made possible by artificial heat, LED, and sodium lights, resulting in a pink, purple and yellow fake Aurora borealis. Architecture is given a predominant place this time. Some frames reference the romantic sublime as in Caspar David Friedrich’s atmospheric landscape paintings. Others capture corrugated plastic, chimneys issuing black smoke, and an industrial metal structure covered by translucent pyramids, allowing the lights to pass through. Under a citrus-colored sky, disoriented birds circle above the production plant and cows lie on the ground in a nearby field. The fuchsia bathed electric expanse recalls dystopian science fiction movies as well as Dan Flavin’s florescent light tube installations.

In her videos, Finel slows down to the rhythm of her subjects and allows time to pass through the landscapes. The works do not force narratives nor do they attempt to present a nature isolated from man. No artificial lights are needed to reveal the traces left by our species. Jacklighting is a permanent state: the natural world is preyed upon at all times, intentionally or through the unintended ramifications of human-led actions. A brave observer our times, Finel tracks and contemplates without blinders the sites we inhabit, shape and destroy and reveals them to us anew in all their contemporaneity.